It's The People, Stupid 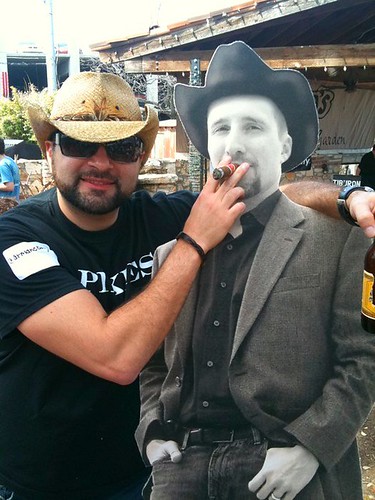 The following is a guest post from Todd Defren, principle at Shift Communications. Todd recently awarded me with the prize of funniest photo of "Cowboy Todd"—his cardboard doppelganger of a replacement at SXSW. My prize? A guest post on his blog. But things have been really busy, so I asked him to write for mine. Enjoy.

My apologies for the crude subject line, but it’s evocative of the truly memorable approach the Clinton campaign took back in 1992 with their in-house mantra, “It’s the economy, stupid!”  This rallying cry was an ever-present reminder to the spin doctors of that presidential election season to keep the focus on what mattered most; to avoid getting sucked into sidebar scrapes that could derail their message and their candidate.

It’s worth revisiting and re-crafting this refrain today — in a marketing arena in which the whole world’s gone topsy-turvy.  As Social Media has blown up the silos between Advertising, Corp Comms, Direct Marketing, Public Relations, Customer Service, and even Information Technology, it’s easy to get caught up in the tools and techniques rather than focus on the sea change underlying this new madness.

What’s this Social Media stuff really all about?  It’s about the people.

When every single person with an Internet connection is empowered to publish content that can be promoted, shared, and indexed forever, it changes the game from “merchandizing” to “people pleasing.”  It was always supposed to be that way, of course, but the myriad layers that existed between the brand and the masses called for more quantifiable processes: “how many visits to the website” trumped “are we making people happy?”

But a brand can no longer afford tweaks that drive up volume; they are increasingly realizing that they need transformative change that drives increased loyalty.

Some brands are afraid of this new dynamic.  I don’t blame them.  Think about it: you are faced with the proposition to influence anyone with an Internet connection to publish nice things about your brand.  That’s the best case scenario.  It’s daunting!  You realize that it is impossible to please all of the people all of the time, too — so your next-best-case scenario is that they remain neutral, and quiet.

Most brands don’t know how to wrestle with this issue; it’s outside their comfort zone and training.

So the default setting is to focus on the MEDIA part of the Social Media challenge.  The communications plan becomes about content creation and social sharing.  Let’s face it:  it is a lot easier to just “count the retweets” than figure out how to transform a hidebound organization into a “people-pleasing” machine.

But it’s possible.  You can break it down into smaller parts.  You can leverage your own people, for example.  You can remember the SOCIAL part of Social Media — the “people” part.

Most large brands (and plenty of smaller ones!) have their fair share of fans and followers.  Beyond communicating with them via MEDIA, it’s fun to think about SOCIALIZING with them.  When SHIFT helped coordinate dozens of “TaxTime Tweet-Ups” for H&R Block last year, we honestly had doubts about how many folks would show up to chat about topics like “April15thophobia” … Yet 100’s of people were more than happy to share a drink with the tax pros.  Free advice and free drinks led to some great engagement — and scores of follow-up tax prep sessions in the subsequent weeks that were directly attributable to those simple get-togethers.

Naturally, I’m not suggesting “throwing a tweetup” is the answer to all problems.  I am simply noting that a smart company will leverage their workaday employees to carry the flag, both online and off, as an integrated part of the larger effort of reputation management.  The H&R Block tax pros who attended those events were empowered to share their knowledge freely, to let their off-the-record personalities shine through — which humanized the brand and allowed all the attendees to slough off some of their foreboding about tax time.  ‘Cuz now that H&R Block office on the corner was “the place where that nice guy, Joe the Tax Pro, works,” instead of “that place I hate going to once a year.”

Of course, in such a scenario it only helps if Joe the Tax Pro is also participating on Twitter, etc., so that a relationship formed over a beer can be loosely continued throughout the year.  It only helps if Joe is creating and sharing media (answering questions on Yahoo! Answers and LinkedIn and Facebook, blogging, etc.).  But that’s not the key takeaway.  Let me make it simple.

Every time you are thinking about a new way to enhance your presence and standing as a brand — when you are wondering about the use of channels such as Twitter, Facebook, YouTube, and Blogger Relations, etc. — just add a few more questions to your planning process:

And when you see your control-freak colleague’s eyebrows arching in silent reproof, you have my permission to smile and say, “Let’s not forget: it’s about the people, stupid!”