« Getting Social With eBay | Main | Getting The Basics Right » 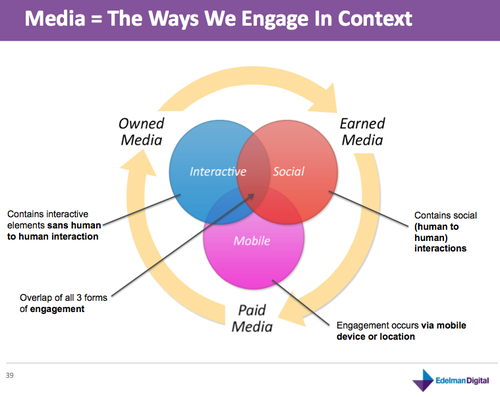 A "media" model composed of paid, owned and earned efforts is nothing new—however it’s useful to think about this landscape in tandem with the different ways we interact and engage which are enabled through technology. There are essentially three forms of digital engagement which can often overlap (engagement in a single initiative can include all three types) but each form can tend to dominate the experience. It’s important to remember that the type of engagement is contextual to what a participant wants to accomplish.

Interactive
This type of engagement is, as its name suggests highly interactive by nature, though what’s worth noting is that there is no social component to it. The primary interaction exists between a person and technology or human to computer. Examples of interactive engagement could be an ATM, or an e-commerce experience or microsites. It can also be a game, video, or any other experience where users engage a system or interact with content. The key distinction is that interactive excludes social interactions between participants.

Social
Social engagement requires the interactions between live human beings (not machines) and/or groups with each other. Most common forms of social engagement can occur on off domain networks such as Facebook and Twitter but can also occur on domain such as corporate blogs or by using the integration of off domain services. The key differentiator for social engagement is that it goes beyond human to computer interaction as described in interactive engagement and usually involves social behavior such as “friending” or human to human direct engagement.

Mobile
Mobile engagement happens exclusively on mobile device as opposed non-mobile device such as a desktop computer. It also takes into context the user behavior of individual(s) who are in mobile situations such as traveling or moving from point A to B. Context in mobile behavior is critical as user activity is influenced by the actual state of being mobile. It’s also worth noting that “mobile” itself may gradually be re-defined over time with devices such at the iPad which blend stationary and mobile behaviors as well as geolocation platforms such as Foursquare which makes mobile activity hyper-local.

Engagement can happen either on domain or off domain and initiatives which include any form of media or content can fall into the following categories:

Paid
Paid efforts always require some type of monetary exchange in order to have initiatives placed on properties whether they be traditional outlets such as display advertising or non traditional outlets such as blogs or advertising within off domain such as Facebook. Paid placement in search initiatives also falls into the category of paid as long as results are tied to non organic or paid searches.

Owned
Owned media typically does not require monetary compensation and can occur on both on and off domain properties that the organization has control over (Facebook pages are off domain, where Websites are on domain but both are owned). Owned properties offer organizations the most control as they can decide what media to promote although off domain properties must be monitored closely as they often support social engagement which cannot be controlled but moderated.

Earned
Earned media nearly always takes place on off domain properties such as forums, blogs, social networks and also mainstream publications. Media is typically earned through word of mouth or unpaid but highly visible results in both search engines and social media referrals. Earned media can also be amplified through outreach initiatives. The core distinction for media which is earned is the absence of overt payment to the property owner for the results.

What This All Means
As stated in the beginning of this piece—much of this should not be new, however it does present new opportunities and challenges for organizations looking to stay in lock step with their customers, consumers and employees. The media ecosystem must be purposefully orchestrated and appear seamless to the individual and groups you are hoping to reach. From a technological perspective, this means potentially adding systems equipped with workflows such as Social Talk or Awareness which allow you to better manage your entire social ecosystem. From a people process, this could mean training and staffing differently. But from the perspective of the people who you want to activate—it simply means that you are relevant to their digital lifestyle. This translates to the the following: we must better understand how people want to engage (IE their motivations and behaviors). For example, the context behind when they want to act "socially" or be left alone and when they are “on the move” vs. stationary. Also, each form of media is its own micro ecosystem within a broader macro media ecosystem—Facebook’s latest addition of community pages could potentially create micro-ecosystems within the broader Facebook environment.

Having intimate knowledge of how these ecosystems thrive (or not) will help us figure out how they can work best together. In other words, get ready to go both wide and deep as you plan digital initiatives. The future of communications will require organizations to be effective both in engaging participants via micro formats while taking a step back and managing media and interactions across the macro (all social, interactive and mobile touch points)—and that’s just on the digital front. The bigger picture? Integration between the digital and real world because this is where it all comes together.