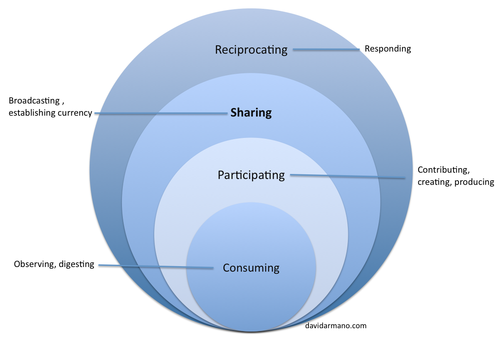 The digital landscape is being reshaped by the news that Facebook is opening up its social graph. Twitter, too, has made waves by acquiring companies that made third-party services for Twitter.

But if you take a closer look, this is part of a more macro trend that transcends two social platforms--despite their emerging dominance. That macro trend is ubiquitous sharing: What are you doing? Where are you doing it? Who are you doing it with? What do you like? These used to be things we kept to ourselves or shared with our friends and family. Now we're willing to broadcast them to whomever is willing to listen.

Social media has led to "social sharing," the broadcasting of our thoughts and activities. It's not a fad. It's a sociological phenomenon, accelerating at light speed. The latest incarnation of social sharing: A platform called Blippy allows you to connect to your social system and share what you bought and how much you spent at retailers like Target, Netflix, Amazon, and Zappos, to name a few. Not only can you log-in to these services quickly from an existing social network, but you can share across multiple networks. Knowing what people are buying when, and how much they're willing to spend is creating a feeding frenzy among marketers looking for the ripple effect.

Not even the drumbeat of privacy concerns seems able to slow down the trend. It was recently reported that Blippy members' credit card information was showing up in Google's search results. Blippy is still going strong though. We are becoming ever more willing to share ever more information with the world. Here just a few implications to consider when it comes to the changing face of sharing in a social age.

Data Gathering. The more we know about an individual, the easier it is to sell something. Someone will amass socially shared data (this is where Facebook is placing bets) and businesses will tap it for profit. Google's integration of archived tweets reveals that even real time data can be sorted and mined. A business may not own the data from all of the sharing, but it's likely they will want it.

Knowledge Sharing & Collaboration. Conflating internal and external social sharing could profoundly affect how we work. Newer internal platforms such as Chatter from Salesforce not only borrow from the Facebook school of platform design, but they also integrate with external networks such as Twitter. The future of social sharing for the large organization could be making the two worlds come together in a secure fashion for the enterprise.

Content Distribution. Social sharing becomes the ultimate form of distribution. Any business or individual who produces digital content in any form will be tweaking how easily the content can be shared, whether by adding a "like" button or designing the content itself to be sharable.

Social Currency. Sharing on the social web acts as a form of currency. Sharing useful information that might help someone within your network scores you points and builds equity. Finding a deal and sharing that with others can put you in someone's favor, and maybe then they will find you a deal. It's important to recognize that all this sharing isn't some useless impulse. There are reasons why people are willing to share so much. Creative expression is part of it but also, there's often a benefit, value, to the individual who shares.

Social sharing is a major behavioral shift, the most important so far of the 21st century. And the information we choose to share with friends, co-workers and even strangers, is re-defining the idea of what's private and public before our very eyes.