Trust: From Fortress To Wedge 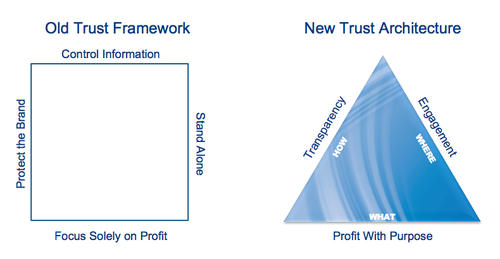 Edelman's 2011 Trust Barometer was officially launched yesterday and as usual it generates a lot of coverage and conversation. I always like to wait a little bit after announcements like this, after the dust has settled to see if there is a nugget which hasn't been covered much. From what I've seen both in the press and social networks, much of the discussion has been around the findings of the US having a generally low trust rating. Colleague Steve Rubel, did a nice job capturing insights around why trust in "friends" is dipping from previous years while trust in experts is rising. Also, a rise in trust (or willingness to trust) a CEO has been widely covered.

But there was less analysis on what I think is truly insightful and that is the shift from how organizations used to try to establish trust and a newer way of looking at it. To me, the above model represents the following:

The Fortress
In this model, an organization attempts to build an impenetrable fortress which is focused on protecting their reputation on their terms. There is a lack of a willingness to engage stakeholders (such as customers or employees), unless it is on the terms of the organization or toward their benefit. The impulse is to control the flow of information from the top down. Only designated spokespeople had the authority to talk to members of the press and when they did, it was from highly orchestrated corporate talking points. The organization protected what it knew at all costs, and the sole focus was on the bottom line. It's a fortress approach because it's defensive and sees not only the competition as a threat but in some cases public opinion which is a necessary evil to be dealt with.

The Wedge
The wedge takes a different approach. Rather than focus on protection of the brand and control of the message (and information flow) it creates a sharp, focused point through radically different business practices. Instead of manipulation, it proactively practices business in a more transparent fashion This doesn't mean it gives away trade secrets, but it becomes more ethical in how it conducts business. It becomes more trusting of its employees viewing them as potential ambassadors verses a workforce full of individuals who are looking to give away competitive secrets. Instead of taking an aggressive and defensive position of shielding itself from attack, it uses the sharp edge of the wedge to go on the "offense" via engaging with its stakeholders. It listens to them and actually talks back. Sometimes in public forums such as social networks. Lastly, it approaches business with a purpose, which in this day and age many businesses should consider. It seeks to profit responsibly and understands that as the business thrives, it has an obligation to give back to society. Think about how a wedge works. It doesn't take on a barrier by force—it finds an opening and starts there. Gradually a wedge can open closed doors.

This is the new trust architecture. A mandate to organizations that closing yourself off to the outside world and only communicating when it's to the benefit of your organization will NOT generate trust and goodwill from the people you want to do business with. Each year, the Trust Barometer makes the case that organizations which are trusted, reap financial rewards. This is a good time to think about if your organization can ever move the dial from a fortress mentality to a wedge mindset.

An executive summary of the Trust Barometer findings can be found here: