How to Craft the Perfect Quora Answer

The following is a guest post from Joe Chernov. Joe is the Director of Content for Eloqua. Co-chair of WOMMA member ethics panel. You can read more about Joe here: http://www.jchernov.com

Q&A sites, whether they be Quora, Focus, Namesake, ChaCha, Aardvark or good “old fashioned” LinkedIn Answers, are all the rage.  In fact, Matt Creamer of AdvertisingAge recently pointed out that Quora has received as much press in six months as Answers.com – the 18th biggest site in the US – earned in six years.  Given the rise in attention paid to this category, participants are left with one question: How can I contribute answers that are disproportionately influential?

Inspired by Sebastian Wernicke’s hilarious and provocative “Lies, damned lies and statistics” TEDTalk, my colleague Andrew Moravick and I decided reverse engineer exactly what you need to do to craft the perfect Quora comment.  We studied nearly 500 answers spanning 50 Quora questions on topics related to marketing, advertising, demand generation and social media, then identified three sure-fire ways to ensure your answer ranks among the most discussed and “voted” posts.  They are:

2.     Include links or (better still) graphics in your answer,

Let’s have a look at each.

Answer First
Speed is becoming the great equalizer when it comes to social business.  Anyone unconvinced of this fact should read David Meerman’s Scott’s Real-Time Marketing and PR.  (You won’t remain unconvinced for long.)  Quora is no different.

You Don’t Know Everything
Social media – especially when it comes to Q&A sites – is a credibility game.  Bombastic consultants who claim to know everything are ignored.  Sales-thirsty vendors who rush to the close are panned.  But the Quora community will embrace both consultants and vendors, provided the person has value to add.  Without question, the best way to value is to incorporate supplemental content into your response.  In fact, answers that contained links or graphics were mentioned in subsequent posts more than twice as often as those that didn’t include additional resources.  They also received three times as many votes as their link-less counterparts. 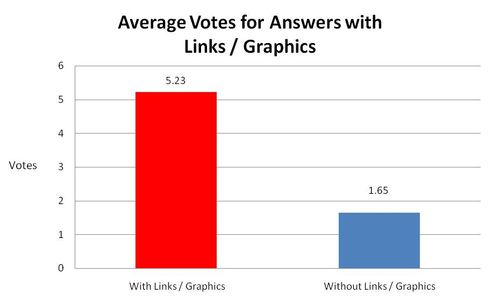 The Magic Number
Who would have thought that there would be a “magic” word count for voluntarily answering questions online?  But there is.  It’s 145.  Or, more specifically, 160 words if you want others to reference your answer; 130 words if you are hunting for votes.

Of course, that level of precision is absurd.  But without a doubt there is a correlation between word count and popularity.  Short posts add little value (they tend to applaud more established community members), whereas long posts run counter to the short-attention-span theater that is social media.  The graphics below suggest Quora members strongly prefer answers in the 100 to 200-word range.

Of these three tips, which is most important?  Generally speaking, being first is the most reliable way to ensure your answer echoes throughout the digital halls of the thread.  But what if you aren’t tethered to your computer?  Is it possible to play “catch up”?  Absolutely.  Embed a graphic in your answer and keep it to about 150 words and your contribution is likely to be as popular as the first in the thread.