Does PR Have a Future? 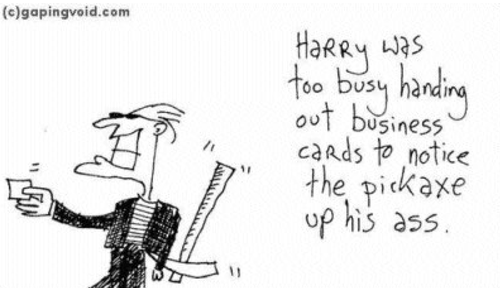 Two years ago, if you told me that I'd be working in the "public relations" industry—I would have looked at you as if you were insane. My impression of PR was that of an industry with a narrow focus and goals which included spinning stories so that the clients a firm worked with would appear better than they really were. I didn't know a lot about public relations from an industry perspective, but for whatever reason that was my impression. The cartoon above showing a "flack" shamelessly networking wasn't far off from what what I had imagined.

However, as I began to investigate and meet some of the practitioners in this broad mixed bag we call the "social" space—I began detecting a pattern. Many of the first movers were either working in the communications group of an organization or had communications (PR) training in their background somehow. Not all but many.

On top of that, there were a few firms that seemed to be going deep in this emerging area—offering training and working with businesses in a way which integrated communications in a more social fashion. Edelman (my employer) was one of these firms. And these indicators got me thinking differently about the field and where it might be heading in the years to come. Below is the last slide of a presentation I gave nearly a year ago: 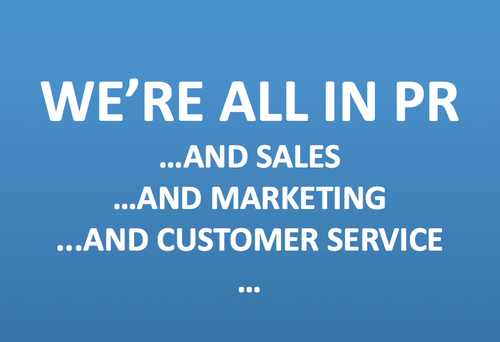 The thinking is that over time as a business becomes more "social"—it begins to gradually move away from totally rigid job descriptions to allow for more flexibility in the things people do as part of their jobs. Instead of a handful of people who officially represent an organization, each employee becomes a representative every time they engage in public (social networks) especially when that engagement is related to what they do for the organization.

It's an extreme vision to some degree—though one can make the argument that we are already seeing the early signs of this now. So what happens to PR? Possibly the same thing that happens to marketing, customer service, and other business functions. It could possibly become "integrated" into the jobs of more people both in and outside of the organization.

If "everyone" is a spokesperson to some degree—does public relations cease to exist? It's probably not that simple since the reality is that "communications" will not end up as a free for all activity, but as something which evolves into more than just communicating but also interacting. In my mind—the key is relationships. Manage the relationships between all critical stakeholders who can make or break your business, and you hold the key to a more sustainable way of doing business. Sound like PR?

If you think this is something you'd like to discuss more—I'm teaming up with Richard Brewer-Hay of eBay (Edelman client), to facilitate a lively core conversation on this topic at SXSW. Hope to see you there.