« The Future of Facebook: A Crowdfunded Project | Main | Does PR Have a Future? »

How Charlie Sheen Is "Winning" The Web 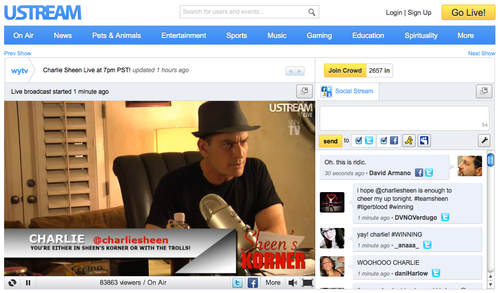 On a Saturday evening, through my Facebook feed—I heard about Charlie Sheen's next move on the internet. I clicked on the link and waited for about 10 minutes as the crew of "Sheen's Korner" grappled with technical difficulties and then a few minutes after it's "advertised" air time, the show came on. Welcome to the new prime time. Sort of.

Sheen's Korner, a live broadcast leveraging the Ustream platform and integrating several social networks including Facebook and Twitter just might have created a new category of entertainment—the extreme reality stream. The stream, while bizarre at most times was what you'd expect from something like this—a low production and unscripted combination of Sheen's notorious catch phrases ("winning" etc) combined with some sporadic efforts from Sheen and his "co-hosts" to respond to viewer comments. Compared to Charlie's Twitter account which soared to over a million followers in record time—his "reality stream" paled in comparison, only attracting just over a hundred thousand viewers during the broadcast.

What will become of "Sheen's Korner"? I'd be curious to see if a sponsor comes forward, but even if the experiment "fails"—it's a win for digital media as more people will know what video streaming is after Charlie makes a few more headlines thanks to his latest exploits on the social web.