The Multiple Choice of Criticism 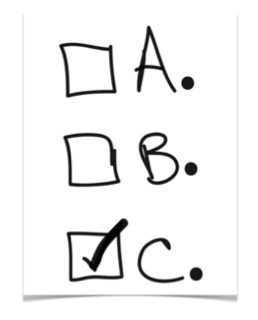 The thing about criticism is that it's less about the criticism itself and more about what you do with it that counts. I always find that when criticism comes my way, there's a sort of multiple choice scenario that goes through my head which looks something like this:

Option A: Reject and retaliate
In this scenario a voice in our head says something like "they don't know what they are talking about" and our brains go into overdrive figuring out ways to poke holes in the criticism and fight the "attack". It's the most spirited of the options and can leave you the most bitter.

Option B: Accept and agonize
The voice in this option is the exact opposite of the first. It tells you that you're no good and that everything in the criticism is true and that your best course of action is to just accept it and try better next time. This option causes the most agony because we just don't know when to stop beating ourselves up.

Option C. Filter and move forward
Criticism comes from a variety of sources. Sometimes it's meant to tear down, other times it's meant to build up. Regardless, all criticism contains both truths as well as untruths. The master recipient of criticism looks for the grains, nuggets and sometimes boulders of truth embedded in the critique. The rest is opinion--it's subjective and most criticism contains a great deal of that. In this option, you filter the signal from noise, identify opportunities for improvement and move forward.

As you can probably tell, I've done my share of A and B and have that experience to draw from. But these days, I most often land on C as the best choice for how to handle criticism. Listen, learn, adapt. Above all else, be very selective about what you take to heart and never stop moving forward after you've finished answering the multiple choice question of criticism.