What Bin Laden's Death Teaches Us About Modern Media 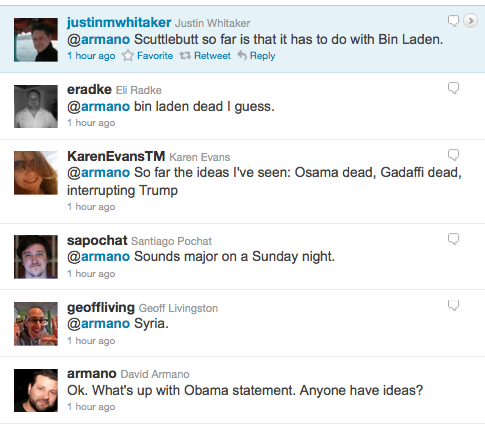 I'm sitting here on an historical Sunday evening watching the news of Osama Bin Laden's death unfold in real time. It's been over an hour since the news of a pending presidential statement first hit the national airwaves. It got me thinking about the state of media based on how I was digesting and consuming it. Here are a few thoughts:

Media Will Continue To Fragment
I first caught wind of what was going on via cable news on CNN. The network, however was not speculating on details of a pending presidential statement, so in addition to scanning other television channels one of the first things I did was ask my network on Twitter what they had heard (above). I had gotten back a variety of responses but noticed that several were indicating that they had heard something about Bin Laden being killed. Immediately I stopped and thought about what I was doing. Television was not immediate enough and too conservative when it came to getting information first hand—I was looking to Twitter for the "scoop" and television to eventually confirm it. 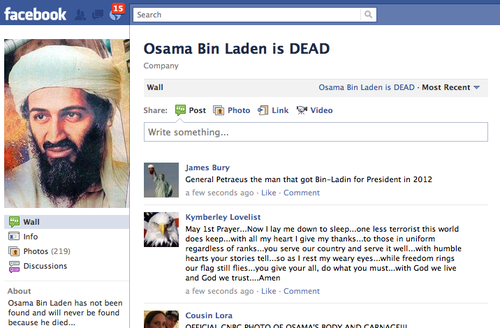 Social Media Spreads Like Wildfire
Historical events such as the death of Osama Bin Laden continue to highlight the speed and virality of media which is generated and distributed via social networks. Less than two hours after the news broke—a Facebook Page called "Osama Bin Laden is DEAD" accumulated over 150,000 likes. Multiple Twitter accounts have already cropped up including @ghostosama attracting over 17,000 followers instantly. Once again, a major global event highlights that media is no longer a broadcast activity and that social networks amplifies activity instantaneously. 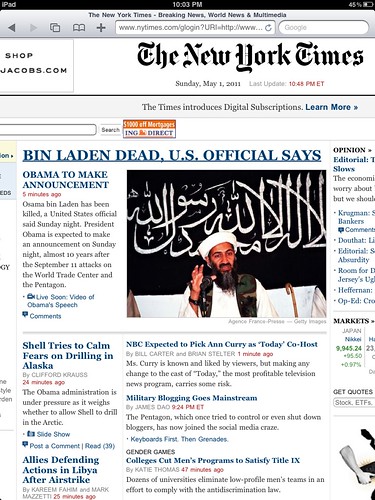 The Validation Era Is Real
As colleague Steve Rubel points out—validation by authoritative media sources is more critical than ever. While we may get information directly from peers, in real time fueled by multiple social networks, we don't instantly trust it all. I found myself taking a screen grab from the New York Times site (above) as a way to validate (and document) the historical news. All media is now shared across multiple spheres (mainstream, tra-digital, owned, social)

Curation & Aggregation Is The New Spray & Pray
With so much content being generated, so quickly—there is the need for it to be selectively curated and aggregated into destinations which make it easy to digest. Platforms such as storify (see example below) help do exactly this.