The Social Layer: Six Thoughts On Where Google Plus Is Going 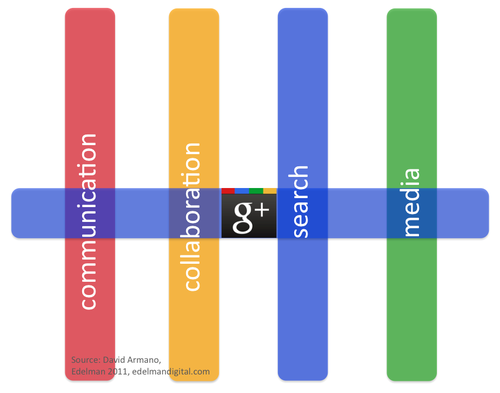 I've been deeply immersed in Google Plus for the last week or so, not only following what's being said about the service but actually using it, kicking the tires and making observations along the way. For what it's worth, I think Google Plus has an incredible amount of potential for a number of reasons. Here's a few thoughts or more accurately opinions. Everyone has a take, so the only thing can offer here is that I've had these thoughts in my head while using the service but wanted to give it some time before putting it into writing.

1. Google Plus Isn't A Social Network, It's A Social Layer
Google Plus looks like a social network and feels like a social network but I don't think that's where all of this is going. What Google has been successful in doing is creating the beginnings of what I think will become a social layer across the Google/Web ecosystem. The brilliance of their strategy is that the experience is good and seems designed for users craving a solution that takes aspects from Twitter, Tumblr and adds some of the familiarity of Facebook resulting in a promising social experience which lets users broadcast in public or share and connect selectively. If Google can scale and refine what's making G+ appealing to early adopters, they will be well on their way to showing the rest of the world what a social layer looks like (and I'm looking forward to watching this unfold).

2. Google Plus Isn't A Facebook Killer And Doesn't Need To Be
The media and pundits will continue to ask the question of Google taking Facebook out. I am fairly confident that average social "consumers" (think your mom or non industry friends) will not be leaving Facebook any time soon. However, this doesn't mean G+ will not become a significant force in media and other areas--I believe it will because it offers enough compelling connectivity, social features and content to siphon attention away from multiple networks/communication platforms including Twitter, Foursquare, Tumblr, Posterous, E-mail etc. As my colleague Steve Rubel points out, time and attention are finite. The more time and attention G+ gets from users and publishers, the more it takes away from all others. In my opinion, Google plus will take away enough time and attention for other networks to feel its effect and influence.

3. Journalists, Public Relations Professionals & The Media Will Eventually Flock To G+
Facebook knows that they need to appeal to journalists and media professionals in order to become an even more influential network. Currently, journalists favor Twitter over Facebook due to it's real time and open nature. Google Plus combines these aspects of Twitter with a way to organize "sources" and information organically. I believe this is where Facebook will feel Google plus most as media entities begin to incorporate the service into their routines. I don't see Facebook being structured as well for things like scanning headlines and leveraging journalists as personalities.

4. Businesses With Employee "Ambassador" Models Will Activate & Deploy Them
Call them community managers, evangelists, or corporate ambassadors, many business models leverage employees as public agents to educate, engage and activate advocacy amongst their customers. Google Plus has come out swinging strong with features such as circles which makes managing multiple groups of connections effective (something Facebook or Twitter doesn't do well). For example, a community manager who only wants to communicate or give their best content or news away to a their most engaged or high value members can customize different content to different groups.  Naturally, many company "ambassadors" will organically begin cultivating their network, but the real opportunity lies with a coordinated deployment.

5. Big And Small Business Gets A Second Chance With Google+
Google Plus offers not only users, but business and brands a second chance at getting in while the infrastructure is still being put in place. Though Google has not rolled out brand pages (or pages for non human entities), companies of all shapes and sizes who may have fumbled their efforts on Facebook, Twitter etc for a variety of reasons will have a second chance at setting up their "embassies" on Google Plus with some planning in place and a host of learnings to draw from efforts on previous networks.

6. Google Will Bring Search & Social Together
Nobody knows how exactly, but Google+ is likely going to bring the worlds of search and social even closer together. Already, they remain linked—(for example, the more your content is shared via social media, the more it does better in organic search results). However, Google+ itself it not yet search-able (officially) while in other cases Google has offered ways for content producers to attach their identities to search results. If someone is going to figure out how these two worlds connect more interdependently it will be Google.

Google Plus is no Empire Avenue or Quora—it’s the company’s arguably successful attempt at a social layer, which will likely integrate across other verticals and intersect with search.  Personally, I think it could be a serious game changer for the reasons I’ve listed in this piece. Challenges for both individuals and brands will remain investment, risk, strategy and getting up to speed on this ecosystem in real time. My advice is to get the right people in your organization focused on determining if this space will affect your industry. At minimal, pay close attention to it. On the other end of the spectrum, if you want to break new ground—consider investing in all things Google as they weave their social layer across their considerable ecosystem.