« Where Were You? | Main | Facebook Can Thank Google For Timeline » 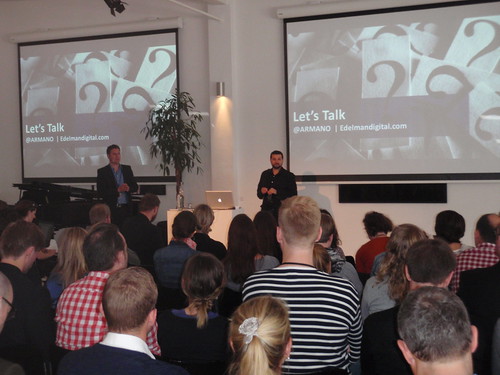 Summer is over and Fall is officially into gear (boy is it ever). I actually spent a good part of the summer focusing on a local client and welcomed a little less travel. But now that things are back in swing, well it's time to shake things up a little. Here are a few places I'll be speaking at over the next few months.

New York: Mashable Social Good Summit
Thanks to the folks in our digital health practice, I get to share the the same stage with folks like Lance Armstrong, Geena Davis and Ted Turner. I'll only be up there briefly, but will be sharing some initial finding's from Edelman's upcoming Digital Health Barometer.

DC, Chicago: Lithium Likes To Love World Tour
I'll be joining folks like former Dachis Group colleague Peter Kim along with existing colleagues Michael Brito and Marshall Manson in both the DC and Chicago stops of the "Likes To Love" world tour from Lithium. Will be getting into social business trends setting up the stage for a few in depth case studies from folks like Verizon's Becky Carroll and RIM's (client) Michelle Kostya.

Minneapolis: MIMA Summit
In addition to speakers like Chris Anderson and Avinaush Kaushik, Edelman Digital's own Chuck Hemann will be joining some of the great minds in technology and business at the MIMA Summit. I'll be joining forces with Mullen's Edward Boches where we plan on mixing things up with an "un-panel" or group therapy for would be innovators. We promise it will be fun.

New York: Pivot
Pivot, guided by Brian Solis and featuring some of the brightest minds in the business including Ford's Scott Monty, Charlene Li, and Nestle's Pete Blackshaw should not dissapoint. I'll be discussing the new influencers and why it matters in media and business.

ScottsDale: Constellation's Connected Enterprise
Thrown by Constellation's notable luminaries such as Ray Wang, and featuring compelling speakers such as John Hagel (Power of Pull) and Doc Searls (Cluetrain Manifesto), I'll be discussing the role of "design" in building a social business.

Los Angeles: Blogworld
The industry's best kept secret is Blogworld. It has more substance than SXSW and networking which is smaller, perhaps more focused but just as good. I'll be discussing what Social Business Planning is and how it can be put into action. Look forward to speaking along side a roster that includes friends Ann Handley, CC Chapman, Jason Falls and Liz Strauss just to name a few.

Phew. I need a vacation already. Hope to see you at any of these events and as usual, be sure to say hello.