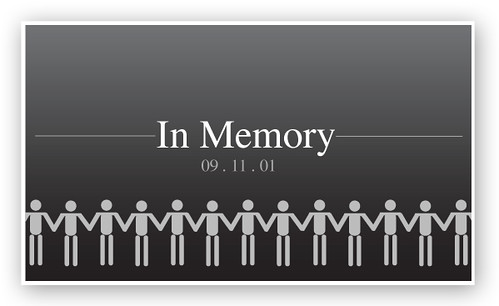 It could not have been a more perfect day in Chicago—clear blue skies and crisp but sunny. I had a big presentation to give at a client, so as I got ready in the morning my thoughts were focused on that. For whatever reason that morning, we had our television on and I caught the news of a plane crashing into one of the Towers at the world trade center. I remember seeing some of the footage of the fire and smoke then immediately leaving so I would not be late for my meeting. The story was just beginning to break at this point and I never even considered it being a passenger airliner.

Since it was so nice out, I decided to ride my motorcycle to the meeting site (about 30 minutes from our home) and was essentially cut off from the rest of the world and the developments. By the time I had gotten into the clients office, everyone was talking about the events unfolding and by this time, the second tower had been hit. We had a screen up and were watching the live footage.

But, a decision was made to proceed with the meeting and the presentation. I delivered my part of it as best I could and clearly minds were elsewhere. We finished the meeting early and immediately brought the screen back up with the live coverage. I'll never forget this moment. The world trade center or "twin towers" as I called them growing up were GONE. I kept thinking, where are they??

I called my wife immediately but could not get through to any of my family in New York, so I rode back home and watched in horror as the day unfolded. Throughout the day I remember looking over at our nine month old baby boy and wondering what kind of world we had brought him into.

Fortunately none of my immediate family who worked in New York were hurt but we all know families and friends of families that were. Recently, I was walking past my high-school where I grew up on Long Island and noticed a street sign named after someone who was in one of the towers. He had graduated one year after I did.

So, that's where I was. I will never forget the day—or those directly affected.