« Starbucks Reminds Us What We're Made Of | Main | Social by Design: Design Thinking & Business »

We Are Indivisible: Can Starbucks Ignite a Movement? 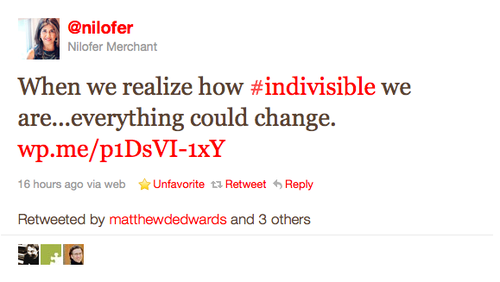 I've just gotten off three business related conference calls and am writing this from a hotel room in Los Angeles as I'm about to head out to Blogworld (speaking here tomorrow). Blogging on the fly is probably the last thing I should be doing. But yesterday I noticed several tweets and I've also had a number of e-mail exchanges with people who are motivated by the "Indivisible" wrist band which is part of a Starbucks initiative I wrote about recently.

Again, while Starbucks is an Edelman client, I have no affiliation with this initiative whatsoever other than as a citizen. Here's why: while walking through some of the Occupy Wallstreet protests in Manhattan and also seeing them in other cities and on the news—I couldn't help but feeling somewhat alienated. While sympathizing with the reasons why people are hitting the streets, I just don't relate to the tactics. Seeing someone carry a sign asking the government to pay for their college education doesn't resonate with me.

But Indivisible does. It's how I was brought up. I lived in a neighborhood where people helped each other when others were down. It's the same reason we took action to raise nearly 17 thousand dollars when we encountered a family in need. Indivisible to me means that we can do anything when we stand together.

So. If any of this stirs you as it has me. I'm asking you to do four things.

1. Get the wristband.
2. Tweet about what "indivisble" means to you—and use the #indivisible hash tag (it's not official).
3. Use any social network, e-mail, face to face...tell others how you feel.
4. Post pictures here (or anywhere).

Can a brand start a movement? Only people can, but people are everywhere—behind brands, companies and out in public. Again. This is a personal pet project of mine. Because I care about what's going on too. And I believe we can do anything. 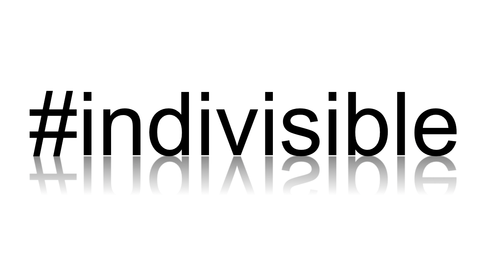