« What's A Picture Worth? | Main | Launching a Social Command Center (Without The Center) »

Trust Shifts From Institutions To Individuals 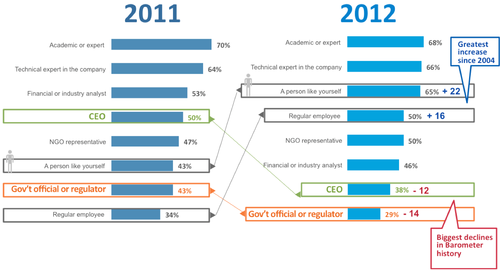 Today I had the opportunity to present to academics and industry experts from the international poultry industry (you can listen to a re-cap via a short podcast from "Agwired" here). During the presentation I was able to share some results from the recently released 2012 Edelman Trust Barometer, in which the overarching theme is a general skepticism toward institutions such as government and big business with signs of hope when it comes to empowered individuals.

A Person Like Yourself
In last year's study, it was the expert and even the analyst who enjoyed some degree of trust from the public according to the survey, but this year it is "a person like yourself" who sees the most gain. What I stressed to the group of experts at the event was that this is an opportunity for them to share the stage with "regular" people who have a voice via a variety of social channels and also a responsibility to be "in tune" with the topics and issues they care about and discuss. Last year I speculated that the decline in attention given toward people like ourselves—our friends and peers may have been related to social media fatigue. This year, it's possible that many of us who make social networking part of our digital routines have gotten a bit better at filtering the signal from noise, thereby being both more generous but focused with our finite attention spans.

Regular Employees
In this year's survey, CEO's took a nose dive compared to last year reflecting a somber and skeptical mood which likely connects CEO's with the institutions they work for. Only government officials fared worse. But it is the individual "regular" employee who moved from the bottom tier to the fourth most credible and trusted resource. This signals a significant opportunity for organizations who have cultures in place where employees themselves are trusted to behave responsibly and are active in public spaces. 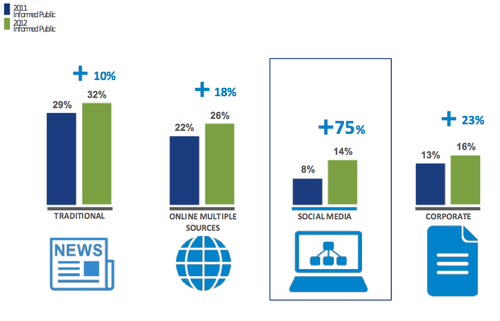 Fragmented Media Consumption (And Production)
A recent Mashable article reported that digital ad spending had surpassed that of print—bringing an era to a close and emphasizing the new reality of media fragmentation. The increase in social media (illustrated above) is partially fueling the shift—with social networks driving much of the traffic through sites replacing e-mail shares with buttons that blast out content across your networks amplified by others. Nobody knows this more than the traditional news media outlets who are scrambling to ensure that content is designed for social sharing.

Trust In The Digital Age of Empowerment
With trust in government, big business and at a broader level institutions down—there remains experts and individuals both who are in a prime position to take their platforms into digital spaces and elevate their position. For institutions, there's an opportunity to improve sense making out of what's being said not only by the mainstream but also talked about via networks, message boards and anywhere a comment button can be pressed. For CEO's, a chance to take a second look at their workforce—instead of seeing worker bees, the connected CEO may see employee ambassadors who when motivated can be the most effective spokespeople for their company.

For the complete findings on this year's Trust Barometer—the data can be viewed and downloaded via Slideshare (below).