How To Be A Social Media Self-Righteous Jerk 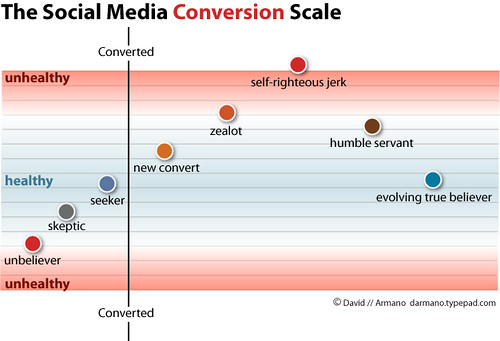 The scale above shows the many stages one has to go through in order to become a bona fide self-righteous jerk in social media. Still, there are many people who aspire to reach this peak, but fall short in executing against it. Given this observation, I thought it would be worthwhile to piece together a few best practices which will ensure your status as a social media self-righteous jerk (or SMSRJ). In no particular order:

1. Join The Klout Gestapo
All social media SMSRJ's know that Klout is simply evil incarnate and requires a organized force to take on this evil axis of influence wherever it resides. A true SMSRJ will never-ever create a Klout profile and lash out against anyone who dares do so. If Klout is the Devil, then Klout Perks is the Devil's spawn. Perks are to be shunned, banished and those who recieve them should be branded with a scarlet "K".

2. Unfollow Offensive Twitter Followers In Public
Only seekers un-follow people or companies who they no longer derive value from quietly. It is the true SMSRJ who announces it out loud in some fashion or another. Tactics here can range from a thinly veiled post or an all out campaign. Make sure you get a few social media gurus on your side to link to your public posts and shout your discontent from the rooftops. A SMSRJ really knows how to make a public spectacle of their personal dissatisfaction.

3. Target Social Media Gurus
While on the topic of social media gurus, ignore the fact that while almost no true social media gurus actually call themselves that—they are the conduit to becoming a guru yourself. Take them down, one by one. Call them social media gurus every chance you get. Make sure all your social networks know you are doing real work. Tweets like "I'm still at the office knee deep in spreadsheets" will establish your credibility as a non guru. On your non-guru social media blog, write at least one post a month taking on a clearly identified guru in any subject you wish to establish authority in. If you're really lucky, they might even link to you.

4. Analyze Social Media Influencer Lists
A new social media influencer list comes out about once a week. Make sure you find them and when you do, interrogate the creator on their methodology. Be sure to use your own made up metrics to throw them off the fact that you're actually upset that you're not on the list.

5. Use The #Humblebrag Hash Tag At Will
If it looks like a humblebrag and acts like one—it's a humblebrag and any SMSRJ has the responsibility to use the hash tag to combat this perverse social media behavior. After a few good uses, be sure to celebrate on your next vacation by relentlessly publishing pictures of beaches, mountains and gourmet food on Facebook. Hey, everybody's doing it #humblebrag.

6. Take Up The Cause Against Personal Brands & Corporate Cheerleaders
A true SMSRJ creates social media feeds which reek of authenticity. However, shameless promoters are out there at every corner. They need to be dealt with. Let them know when their personal brands have gotten out of control. Or even worse, if they talk about their jobs and promote the companies who support their families. Take a zero tolerance stance pointing out that neither is acceptable. A handful of SMSRJ's have even built successful personal brands pointing out how dangerous personal brands really are. Learn from this and you too can be internet famous in an ethical, respectable and admired fashion.

7. Call Out The Book Promoters
Let's face it. Every author out there is using social media to promote their books. Unacceptable. Out them, blacklist them and once you have enough material to write a book yourself, make sure you mention your book in one out of every five social media posts. Just enough to promote it, but not enough to arise suspicion from non-author SMSRJ's.

8. Engage (And Let Everyone Know How Engaging You Are)
So many people are out there using social media as a broadcast channel—they never even talk to anyone else. Blasphemy! Make sure that you spend most of your activity engaging with others. Make sure they know you're engaging them. Remind them to engage back. Engage to the point where you risk work deadlines or real world relationships. Social media requires sacrifice. Bring your offerings to the alter of engagement and make sure everyone knows it.

9. Embrace Two Colors: Black And White
Nuance is for the weak. The SMSRJ sees only two shades—black and white, right and wrong. There is only one way to do social media right—see steps 1-8 for instruction.

10. Direct Your Energy Toward The Unenlightened
Spend the majority of your time watching others. Obsess over their social media habits and dissect their transgressions. It takes ten thousand hours to perfect any craft and this goes double for the committed SMSRJ. Don't be distracted by your own initiatives but stay focused on what others do and allow their behavior to drive your mission in social media—to rectify social media injustices around the world.

*This post designed to make you think. Social media guru not required.