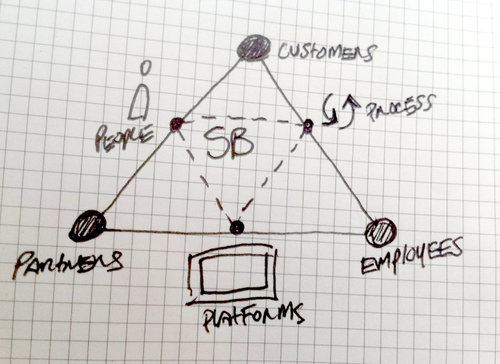 I just finished up participating in one of our events for Social Media Week, a global conference taking place in several major cities around the world. Our panel moderated by colleague Robin Hamman included Euen Semple who previously ran social efforts at the BBC and Vincent Boon from Giff Gaff, while it's still fresh on my mind, I wanted to jot down a few key thoughts:

Social Business Is About Applying Purpose & Intent At Scale
The above diagram is something I started off with and an attempt to describe social business in one visual. At it's core, it's about connecting stakeholders who are critical to the success of your business. And as I've stressed before—it's about executing initiatives leveraging the "3 P's"—People, Process & Platforms. I stressed starting with people.

Social From The Inside Out
Euen said the following:
"There's no point aspiring to be 2.0 outside the firewall when you are still operating at 1.0"
While I would not go as far as to say there's no point, (an organization can learn from external initiatives) I concede that Euen's point is well taken as so many organizations don't internalize social behaviors externally. If you can't walk the walk, how can you talk the talk?

Members Only
Vincent stressed that Giff Gaff customers are viewed as "members" and I simply loved this perspective. It is exactly in line with how "social" has altered our behaviors. Marketing departments always viewed their target as "consumers" but thinking of them as members and co-creators is a really nice way to acknowledge how empowered they are and how this can benefit themselves as well as the business.

Shiny Objects Be Damned
As I write this, I'm looking at a leaderboard created for Social Media Week London which uses Kred to rank "movers & shakers" AKA individuals creating noise this week at the events. It's clever but also a distraction. I referenced some of the efforts Verizon takes to include feedback into their services via forums—as well as levering experts who actively produce content and engage. Often times a social business is one that doesn't attract the most attention, but generates results. Beware the bright and shiny objects that capture attention but don't deliver long term value. 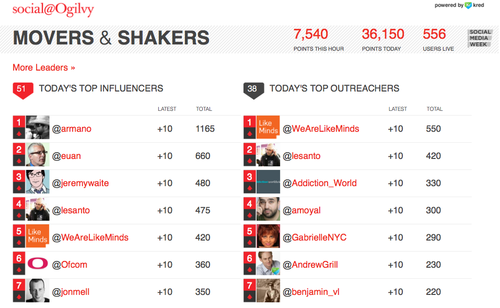 Below is a short video of the panel before it started just to give you an idea of what we covered.