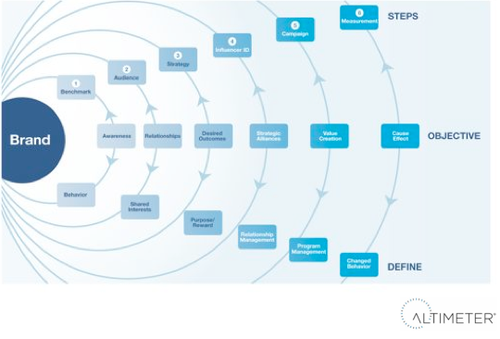 Altimeter's most recent report titled "The Rise of Digital Influence" revolves around the theory and practice of "digital influence". A trend that will not die despite the industry's counter movement against platforms such as Klout and the scores of imitators which have subsequently followed. (Full disclosure, I was interviewed in depth for the report). Altimeter rightfully begins the analysis of "digital influence" by calling out the distinction from how we view influence traditionally and offering a brief definition:

"Traditional influence is defined as the act, power, or capacity of causing an effect in indirect or intangible ways. For the purpose of this report, we will use the following as the definition for Digital Influence: The ability to cause effect, change behavior, and drive measurable outcomes online."

The last line is really important as it gets to the crux of the complexity and controversy of looking at digital influence: the difference between measuring the potential to influence action and the actual outcomes of that potential—connecting the two is where the rubber meets the road. Altimeter does a nice job of articulating "Pillars of Influence"—a similar construct to one I had worked on last year, but I really like how they've fleshed out a way of looking at the building blocks of how you build upon the potential to influence decision and actions. They are:

Pillar 3 — Resonance: The culmination of reach and relevance serve as the foundation for “the score.” Here, resonance is the measurement of the duration, rate, and level of interactivity around content, a topic, or conversations. High resonance ensures that more people will see each post or update. In theory, this number determines the reach of activity and how long it can stay alive in the social streams of online consumers.

Notice that there is no mention of tools in these pillars. This is because, tools and platforms do not dictate what the pillars are and are only helpful in supporting the intent of an outcome. Measuring influence in the digital realm is always a means to an end and never and and itself. 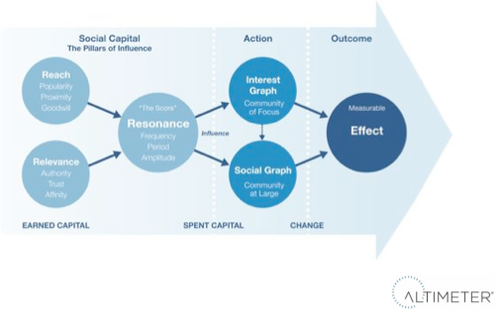 Probably my favorite part of the report and what Brian and I spent a good deal talking about was the concept of "social capital" and it's correlation to an effect. When looking at programs which are fueled by tapping digital influence, it comes down to the social currency of individuals which is much more critical than network size. A large group of individuals who have built up social capital over time can be just as influential as a small highly connected group with similar capital built up. Combine these dynamics with the size and quality of their social graphs and you have the basic chemistry to create an effect. When we raised nearly 17 thousand dollars for a family in need (effect) I observed that it was less about the size of people's networks (it took large and small ones to move the needle) and more about the quality of them.

Surprisingly or perhaps less so, Altimeter's report lays out a set of high level metrics which can be used as a starting point when building your own measurement framework against programs which involve digital influence. What I noticed most is that nearly all of the below metrics are consistent with many external social programs, and even more broadly consistent with traditional metrics which have always resided within either public relations or marketing business functions. The biggest take away here is that while digital influence tools and techniques may have evolved at the core it's being embraced as an upgrade to both traditional marketing and public relations. Altimeter's metrics include:

•    Brand Lift/Awareness — Benchmark where the company is today in social networks, and set goals and KPIs to improve brand awareness and reach.
•    Brand Resonance — How often is your business discussed in the social web today? Define how resonance will keep your business top of mind and to what extent can be driven through influence programs.
•    Reach Through Advocacy and WOM — Existing advocacy and WOM initiatives can be designed to influence customer behavior and decisions.
•    Sales/Referrals — Through special offers and promotions or exclusive incentives for engagement, brands can drive leads, sales, and referrals.
•    Sentiment/Shift — Negative or indifferent perception can be shaped toward positive or favorable views.
•    Thought Leadership/Authority — Tapping into the communities of expert individuals can help your brand tap its social capital to contribute to the stature within the community you hope to earn.
•    Demand — Invest in demand creation through exclusive programs and intentional outcomes.
•    Trends — Changing behavior is possible once you understand what it is today, how you see it evolving, and identifying the right people and value to help you get there.
•    Audience — Investing in the size of your community and its quality is a function of design and purpose, and its value grows through strategic alignment and engagement.

Why It Matters: People Don't Change, But Digital Behaviors Do

The report is worth reading not only for it's concise constructs, but also for it's collection of real world case studies as well as it's overview of tools. (Disclaimer: Tweetlevel is an Edelman platform and I am on the advisory board for Appinions). However the report is timely as it underscores a reality—while the basics of communication and interactions remain the same, our digital behaviors are constantly evolving whether it be the newly empowered consumer class or the ability for individuals who have never met in person to weave powerful and influential online networks. Understanding, measuring and tapping digital networks is fast becoming the equivalent grassroots efforts meets rewards programs. As individuals continue to build up their networks earning and spending social capital, businesses will seek to align themselves with the most relevant and connected groups.

A full version of the report can be found on Slideshare: (below).