« Own The Data, Own The Future | Main | Five (Intuitive) Reasons To Bet on Facebook » 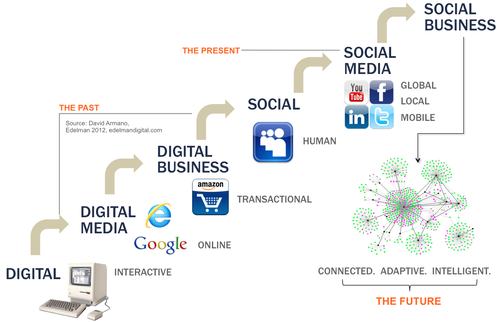 "Chasing the past, I stumbled into the future". - T A Sachs

I've always been a firm believer that in order to look to the future, we must look back to and fully grasp the past (and the present). Having had several recent engaging conversations with smart people who I respect, I've picked up a hint of exhaustion around usage of the word "social". Could it be that some who saw the "change" coming years ago are weary of having carried that torch for so many years as we move into the heavy lifting? It's natural to want to move to the next thing—but I'm convinced that today we are largely still talking about the "social media" era. The best of "social business" is yet to come in my opinion and we have a lot of work to do in between. Let's take a look back before we begin to look forward.

Digital: The Interactive Revolution
When I entered the workplace—the world was already in the process of going digital. E-mail was just being introduced and I had gotten a job immediately largely because I entered the business world with a valuable skill—I was taught desktop publishing (ie computer aided design) in addition to design fundamentals. The digital revolution initially begun by replacing the analogue world. Things like music converted into digital formats and computers offered an interactive medium to produce upon. Digital began seeping into personal and professional lives and organizations, businesses and industries had to evolve along with it. Most did and the ones that didn't were outperformed.

Digital Media: Information Goes Online
The second wave of the digital revolution began to gain steam as the internet became move pervasive. The "Web" became first accessible through browsers and then it became the search engines which organized what we then called "the information highway". A new digital economy was born as companies rushed to stake their claim online. The "corporate" Website was born—essentially a glorified brochure for your organization however the business world began to wake up to the fact that not being on the Web was perhaps risking being irrelevant. This sentiment is important to take into account as we currently wrestle with the current state of social media. Looking back to the "Digital Media" era provides some insights as we look at how social media has evolved.

Digital Business: The Transactional Era
As the Internet, fueled by digital media and a wealth of information became more pervasive, the Internet evolved yet again creating new ecosystems resulting in new companies (Amazon, *eBay etc.) and creating opportunities for existing companies to extend their business models. Banks introduced online banking. Insurance companies supported online quotes. Cars could be customized and even purchased online. Large organizations grappled with back end integration as infrastructure was re-engineered. Digital had become not only interactive and informational, but it became transactional—offering organizations new ways to connect with customers or even employees (intranets). In short, digital became business and the flurry of activity in the form of mergers, acquisitions and the growth of system integrators reflected this.

Social: The Human Web
With digital now established as transformational business tool—the Internet and the world began to evolve again. Early incarnations of a "social Web" such as message boards and forums gave rise to early social networks and the "blogosphere". Networks such as My Space or Friendster introduced the concept of managing a social profile on the Web while blogs began to disrupt the media landscape by empowering anyone to act like a journalist or publisher. The 'Digital Media" era was largely powered by technological connections—computers being connected to a global network. The Social era was powered by people connecting to each other forming a "human web". The word social becomes key during this era, because we begin to shift behavior during this phase. No longer are we just interfacing with digital systems (human to computer) but we begin to interface directly with each other (human to human).

Social Media: Global, Local, Mobile Connectivity At Scale
Today, we live and interact with a digital world which is not only about finding information but is about being "connected". These connections are no longer limited to the personal computer, the primary vehicle which allowed for the original digital revolution to take hold years before. Mobile technology and an "always on" mindset for many individuals now blurs the line between the real world and digital—we no longer "log in" at our desks from nine to five but we are part of a digital and human "power grid". For many organizations, local Facebook pages show high levels of activity vs. global corporate Websites and organizations find their employees asking why internal tools can't be social and mobile. Networks now drive much of the Web's traffic as billions of people share links and opinions about the world around them. As a result of all of this activity—huge amounts of data or "social data" is currently flooding the current global digital ecosystem. This sets the stage for an era that's already begun, but is still in it's infancy (social business).

Social Business: Connected, Adaptive & Intelligent
Despite much of the chatter around "social business", the reality is that most organizations are currently dealing with the realities of social media and only a few truly recognize the potential of social business. Not unlike how digital media evolved into digital business—social business takes the foundation of social media and begins to build new economic models on top of it. Proof points include models such as Kickstarter which disrupts old economic models by empowering any venture to become a funded venture. Existing business models however, are also presented with new opportunities (and threats). Business models where new connections are formed to the benefit of both the business, customer and even employee and shareholders are a core tenet of "social business". One could make the argument that Apple, while infamous for it's secret culture acted as a social business when they chose to connect to would be developers instead of trying (in vain) to design apps themselves. It is this kind of connected ecosystem which is linked to the idea of social business as well as the ability to adapt to conditions based on the intelligence a business can interpret. In the immediate years to come, the amount of data available to the average business will be infinite, however the data will be meaningless without the ability to interpret and act upon it.

Winners & Losers: Navigating Today And Tomorrow's World
Having lived and worked during the "Digital Media" and "Digital Business" era, I think we're scratching the surface as we straddle the worlds between social media and social business today. While there are many similarities to the past, there are also several key differences. Today, digital has become embedded into the lives of millions of people and a generation who has never known life before it pours into our workforce and gradually rises in the ranks. Also, it's worth noting that the above chart doesn't suggest that any of the eras replace each other—rather they build upon one another. We are now in a social-digital environment where things increasingly move in real time. Tomorrow's business models must not only be able to adapt to change, they must help drive that change. These are a few thoughts I've had percolating for some time. As a follow up to this post, I'm going to do a review of a very promising book by former colleague Peter Kim and co-author Dion Hinchcliffe (Social Business by Design). From what I've seen of it so far—it shows a lot of promise in terms of how a business should be thinking about these kinds of things. (below graphic pulled from the book). Would love to hear your thoughts as well. 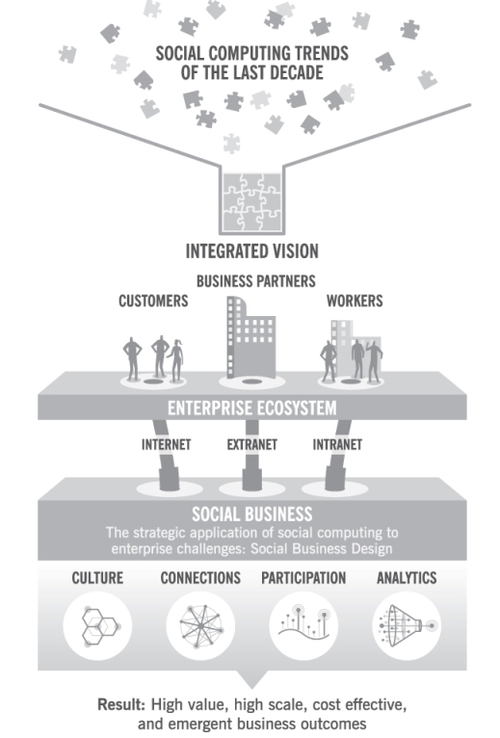 *eBay is an Edelman client

Posted on Sunday, May 06, 2012 in Innovation, Social Business | Permalink