Brands Will Become Media: Here's How 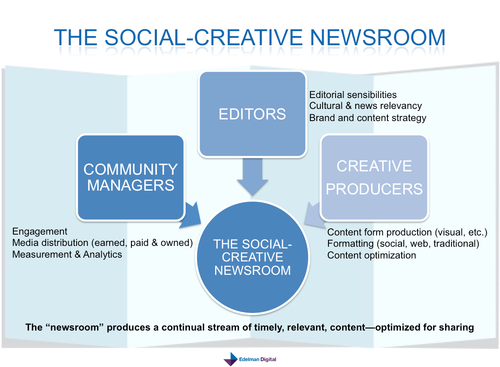 If your company doesn’t have the above model in place a year from now, you may regret it.

You’ve probably felt it for some time, but now the roadmap is becoming clear—companies must build their own media empires. And if they don’t, they risk missing a window of opportunity that provides myriad benefits, whether it’s telling their own stories or becoming more efficient with the media dollars they spend.

Trends in media consumption point to the convergence of savvy marketing tactics combined with a real-time newsroom approach for brands to be seen and heard in a collectively social, digital and mobile world.

First, let’s start with Facebook which, thanks to an alleged algorithm change, has been at the center of controversy in the marketing world. Though it’s cited as the reason brands have noticed their content reaching a lower volume of Facebook users, the caveat is that there is much a company can do to increase the odds of being seen and heard on Facebook. But, it relies on a brand doing a few things really well.

For starters, it’s not enough to solely engage on Facebook. A company now has to provide a steady flow of high-quality content, which then relies  not only on organic content sharing from Facebook users but also on subsequent media purchases with Facebook in order for that message to spread.

Sound familiar? It’s how advertising has been done in the past, only with a big difference. Much of the content that tends to do best is oftentimes associated with current news or highly relevant social issues. Take for example whatOreo has done with its Daily Twist initiative, where in honor of the cookie’s 100th anniversary, agency teams get together daily to decide how to riff off of relevant, often newsworthy, subjects that, by day’s end, produce a new piece of clever, highly shareable visual content that’s sent out into the digital ecosystem. This type of approach makes clear what most pundits miss when challenging the notion of “ROI” in social media—the reason a company wants to amass followers in social media is to build their own marketing/communications network, which bypasses the middle man and goes right to the source.

The end game in social media won’t be accumulation of fans but rather your ability to reach them and potentially inspire action.

The middleman in question could conceivably be media agencies. Why spend millions on media purchases when you can consolidate some of that spending with Facebook? This is where it’s going to get really interesting because most big companies like to clearly divide their needs with partners who handle tasks at scale. Creative agencies do creative and media agencies do media. The problem with this model is that a real-time newsroom-meets-marketing model requires community managers who understand not only how to manage a Facebook page but also know when to put a dollar behind high quality and timely content that will spread. This model jumbles up what was once a clear divide between content, media purchase and engagement.

Becoming media companies may not be optional for brands. Felix Baumgartner didn’t do his stratos jump alone—he had the backing of a major brand (Red Bull), a team of ex-NASA scientists and Red Bull’s media team who covered the event, creating an infinite amount of media coverage that generated a nonstop wave of publicity. I’m not even sure how to estimate the value of this type of coverage, but suffice it to say that it’s significant and leaves a mark on a Google-friendly Web.

And how does all this media spread? This is where players such as Pulse come in.

Whether you are mobile or on the Web, Pulse allows you to have all of the media you can digest and share at your fingertips, served in a usable experience. And much like other media models, some content is promoted organically due to popularity and some can be bought for featured placement.

It’s all going to come down to this: content, quality, frequency and relevancy. If companies are to become media, they must master the art and science of merging marketing with a real-time news cycle. The content a company produces must be compelling and built for an audience with an itchy “like” finger.

And it’s going to take time. Most companies don’t have full-time editors and newsrooms that work hand-in-hand with their marketing department and partners, but in a few years they might.