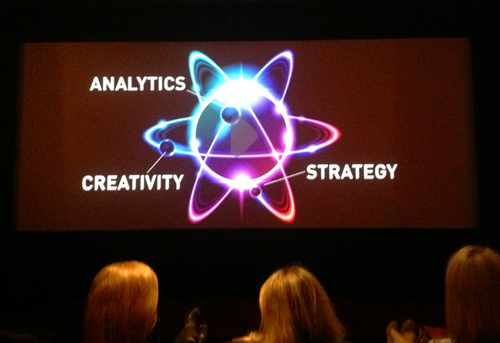 Immediately after I wrote my last post about the need to re-invent public relations—I began getting questions/reactions in real time (starting on Twitter). The nature tone of the questions came with a raised brow as if to say "are you on something?" albeit uttered more politely. Immediately I asked myself the same question. "is change really possible—and can it come from the inside out"? Was I being realistic in thinking that the desire I had to see re-invention through was doable?

I'm writing this post several days later from Los Angeles where I am attending an offsite for our US senior leadership. It's 3:20 AM PST. I can't sleep—but I am inspired. Mark Hass our US president and CEO delivered his vision for where he feels the organization needs to go and all I can say is that it dovetails perfectly with what I wrote recently—if I had to choose a word it would be kindred. It wasn't only the content of Mark's vision and the philosophical alignment that got me all fired up, but also the style as well. Mark pulled a clip from the film Lincoln and used the former president and his leadership style to illustrate what "operational vision" is all about. Lincoln didn't simply have a vision for the nation—he was laser focused on operationalizing it and ensuring that action applied to the vision resulted in impact.

Then the lightbulb went off for me. Change is possible when it comes from both the bottom up and the top down all at once. It's possible when you have a leadership team with a shared vision and the chops to operationalize. Not easy, or even immediate—but possible.

And on that note, I want to end this post with content from a release regarding a recent hire. It's not something I do often— leveraging this space to get the word out on these types of things—however this is important for me as my team and I represent the "bottoms" up change in Edelman and I can directly influence our Chicago digital operation (there are eighty of us now). We've made a few key hires/moves and the most recent is Steve Slivka—a talented creative director who has put in a decade of digital work at Leo Burnett and departed Mullen to become a part of our re-invention. Steve's only one person but his arrival is symbolic, at least in terms of how I view it.

Change happens—especially when it's put in motion at both ends.

“Steve will be instrumental in driving our digital strategies as we define and refine our client offerings in converged media, merging social platforms with paid and earned tactics,” said Armano. “The future of digital creative content lies at the root of this overlap, and his leadership is critical to the firm as we evolve to align our clients’ strategies and tactics and craft unified creative campaigns.”

Slivka will work closely with Elizabeth Pigg, senior vice president, director of converged media services, Edelman Digital, a 12-year veteran of the firm who recently returned to the Chicago office for her newly created role. They will work to raise the creative output in digital content generation and innovation for the firm.

“Digital creative today requires a reevaluation of how content is created and delivered,” said Slivka. “Edelman holds such a respected place in PR and social that it seemed a natural fit to bring next-generation creative to life here, and by tapping into Edelman’s strong capabilities in analytics, converged media and strategy, my team will be well-positioned to deliver creative that meets the constant innovation required to exceed clients’ goals.”

Slivka joins Edelman from Mullen, a Boston-based full service integrated advertising agency, where he built the creative social-digital team at the agency’s North Carolina outpost and was responsible for creating content for clients such as Tresemmé, CSX and Honda Jet. Prior to working at Mullen, Slivka spent a decade at Leo Burnett in Chicago and also launched his own boutique agency, Colossal Squid Industries. He attended Columbia College Chicago for music composition and interactive media as well as The American Conservatory of Music.