2013: The Year Everything Converged 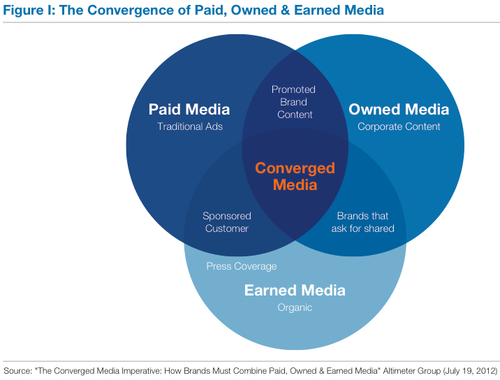 From a media perspective—marketers like to align strategies and tactics along the lines of how things are done at scale. The popular framework goes something like: Paid (advertising), Earned (Word of Mouth), Owned (Corporate) and everything else falls in a somewhat more grey area and from my perspective this is where the action will be for 2013 and beyond. As outlined above, Altimeter calls this area of overlap "converged media" because it's a convergence of different media dynamics coming together. If you ask me—from a marketing perspective this is the future of what, to this point we've called "social".

All of the above. A social platform merely powers the engine and the above could have all been done in a mobile context. I'm doing a lot of thinking in this area as I build out my team because I don't believe that anyone has the "converged" part completely figured out yet. From a talent perspective I've already begun importing folks from the ad agency side of the house who get both social, digital and content. Mentally, I've been thinking about the dynamics of how different teams function: 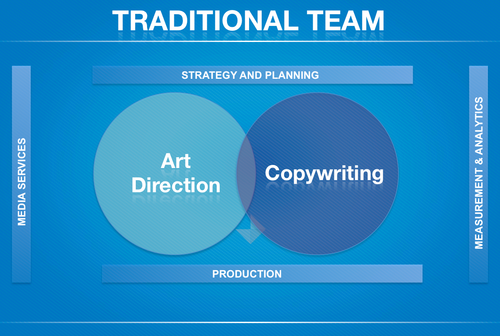 A television centric marketing approach is still fueled primarily by the dynamic duo of a creative team composed of an art director and copywriter supported by an infrastructure of scale which fuels the teams with insights and has a small army of media service individuals who determine how the money gets spent so that the campaign oriented marketing message is seen and heard. 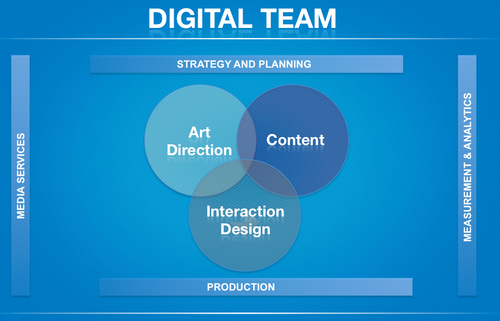 Similar to the traditional team but digital teams often "build" things (apps, sites, platforms) which add an experiential layer to the marketing initiative. Copy for the digital team is somewhat more complex as the things they build can often contain much more than what can translate through offline marketing tactics and so a comprehensive approach to content is required. 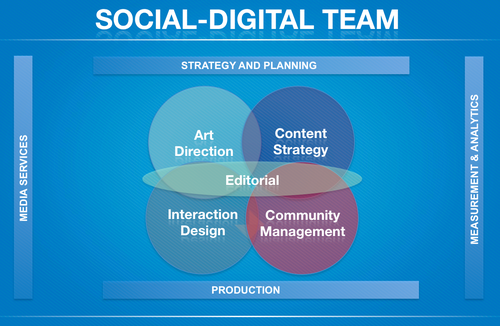 The newcomer to the mix. Many brands are now taking the nuts and bolts of social in house—but the above model whether in house or agency side (or blended) is designed to merge the basics of good marketing (valuable content) with the more real time nature of social news-feeds (timely relevant bursts of communication supported with dialogue). Again, looking at teams from a media perspective—a core social-digital team that targets the converged media space must bring creative, community management and a newsroom-like sense of editorial savvy together.

I think 2013 is going to be the year that things feel like they are all blurring into each other more than ever and is going to create a lot of challenges for both brands and their agency partners as they work together to figure out how to address the overlaps. In addition to bolstering our creative, strategic and measurement capabilities—I've also put someone from my team in charge of thinking about the overlaps between paid, owned and earned and how this all evolves for our clients (a director of converged media services). I think that especially for digital, this is going to be where the action is.