It's Time to Re-Invent Advertising 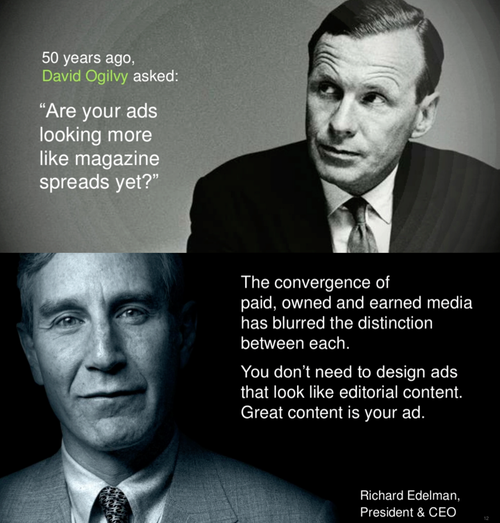 Several weeks ago I drafted a post articulating the need for the Public Relations industry to re-invent itself. That still needs to happen—and there's a lot of work to do. What I didn't communicate in that post is the fact that it's becoming increasingly meaningless to distinguish yourself as a practitioner of "advertising" or "public relations" because increasingly to the end consumer, user or stakeholder—it's all just becoming content. And as I've stated many times before:

Content is today's currency in marketing and communications. And context dictates how that currency gets spent.

And the reality is—nobody has perfected the content model yet—it's still an open playing field. The advertising industry has it's own problems. It may have, in some cases strong chops in creative and in other cases it's perfected the slicing and dicing of data especially tied to demographics. But when you break down most advertising at the core—you begin to uncover this dirty little secret.

It's all about the campaign—and traditional tactics (television & print) still rule the campaign and media spend.

Are their exceptions? Yes, of course. But if you work in the industry, you know the truth. For every Old Spice Twitter tactic there are scores of traditional led campaigns where the lion share of the budget goes into broadcast. Then there are the traditional-digital budgets. These have exploded over the years. Companies invest in banner advertising on Websites and Websites themselves—but are they producing valuable, sharable content through these tactics? If content is today's currency (think memes) then, budgets share should reflect that.

So the ad industry with a few exceptions has their own problems. It now needs to create content designed for instigating second and third screen behaviors (like sharing). It needs to apply "journalism" sensibilities to the advertising machine so that a regular drumbeat of content and engagement can act as a foundation which supports the burst of campaign activities. With all the hype around "creative newsrooms" permeating the industry, the table stakes outlined by the below framework are being overlooked. This does not look like traditional or even "tradigital" advertising. It's something entirely unique: 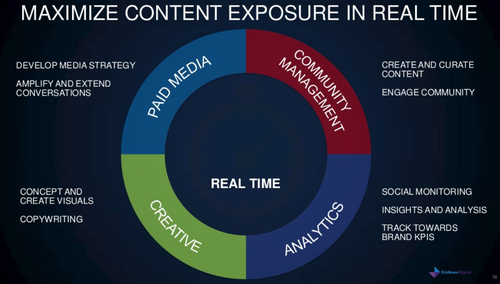 At this point, it's anyone's game to pioneer the future of marketing. Doesn't matter if it's a PR firm, a digital led agency, a large traditional led agency or on the client side, an organization who works with a number of partners in order to be able to execute at scale.

Advertising is being re-invented before our eyes. And not everyone is ready for it.

I am really loving the below deck, led by my colleague Monte Lutz because it outlines several key trends in a more articulate way than I've seen elsewhere. It's a shot across the bow—to marketing professionals who come from any background, that we're smack dab in the middle of a sea change. But it' still early on. It's not that traditional marketing strategies and tactics are no longer relevant. I'm not saying this. But if you're an advertising executive or CMO—you should really ponder about the trends in this deck and think about how your budgets are allocated. And you should ask yourself if you are ready for the next ten years.