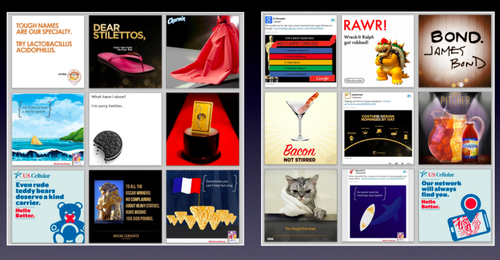 I'm not surprised, but that doesn't mean I'm not concerned. I witnessed something sad last night, while the Oscars were going down. As I anticipated, there was a great deal of activity by brands and their partners who took a shot at producing content connected to the Academy Awards. Some of the content was just OK. Some wasn't. And to be honest, some of it was pretty good even if not earth shattering.

Because I had a feeling there would be a great deal of activity going on—I set up a simple hash tag, because I wanted a way to organize what brands would be doing. So, I set up #OscarsRTM (Real Time Marketing) on my own as a way to keep track. And I invited others to help. And perhaps discuss.

What happened next astounded me. First—the "marketing community" debated the term real-time marketing back and forth. At least this was somewhat intellectually stimulating. Then what came next was something not unexpected but still astounding in it's intensity. A constant stream of snark, dismissal, critique and a never ending barrage of "not impressed."

Really? When did it come to this? Take the below image posted on a Tumblr created for the sole purpose of trashing the efforts from brands last night. 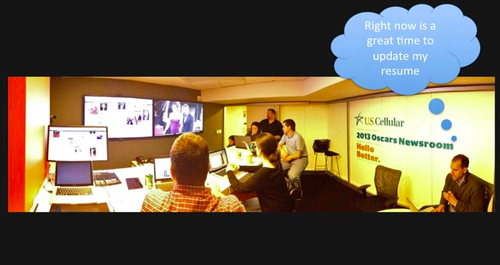 It's the "newsroom" US Cellular set up and was using as their mission control for branded content which they published throughout the evening. I watched most of their content and I enjoyed a few of the posts. And frankly, my first thought was that this particular organization is ahead of many because they are TRYING to provide relevant content vs. just doing straightforward advertising. Does your company have a newsroom ready to go? Do you have staff and partners coordinating and working together to produce content? Are you experimenting AT ALL?

According to the genius who took liberties with the above picture, the team at US Cellular should be fearing for their jobs. And this—this is why I am so concerned. If the marketing "community" is successful at tearing itself down in the pursuit of building up the profiles of individuals too fickle to be bothered, then we all lose.

Nobody tries. Nobody fails. Nobody wins.

Yes, my team was working with a brand last night as well (Kellogg's), but even if we weren't and if I had created the hash tag just to perform objective research, I would still be concerned. And despite that, I have a prediction for you. Brands will eventually figure this stuff out. They will get better and it will become integrated (JC Penney did a nice job of that). It will just become part of how brands build equity (through content). And no level of sarcasm will be able to stop it.

This train has already left the station—so we now choose to get on and guide it to the right destination, or we can sit on the sidelines and wait for the next one, hoping it comes soon. I'll choose the former while others debate the latter. And trying will only make it better.