« Did Real Time Marketing Win The Superbowl? | Main | It's Time to Re-Invent Advertising »

The above video documents some of our recent work with the Cars.com team where we planned (in advance) to support a new campaign that launched during the Superbowl. With the Oscars right around the corner—you can bet that the topic of real-time marketing is going to come up again as brands seek to remain relevant during periods of time where everyone seems to be talking about one thing. Recently, the Harvard Business Review featured an article stating that "advertisers should act more like newsrooms"—in it, this stood out for me:
"The traditional campaign model is rigid. Ad units are created at a point in time and don't generally adapt to emerging themes in culture. In contrast, the newsroom metaphor suggests that content has to be produced and delivered in a continuous stream rather than through a ponderous, slow-moving process of months of campaign development."
It makes a point salient point that's worth digesting—traditionally advertising has been planned well in advance and that planning doesn't often leave room for improvisation. But don't mistake improvisation for lack of planning. If you watch the video above, you see the team working together in the "command center" which required advanced planning. It was no easy feat to mobilize a centralized group working with multiple teams offsite to upload content, respond, track and measure results and engage in real-time. It is well planned improvisation. Below is a sample from the planning process that went on behind the scenes: 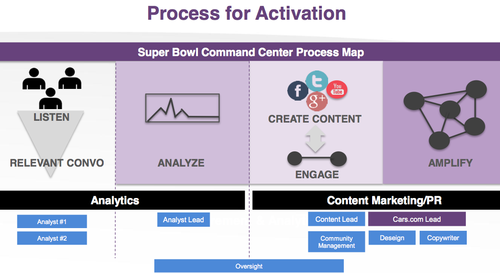 To pull it off requires forward thinking organization (we had this with Cars.com) and alignment with multiple partners (other agencies). It requires the ability (and permission) to improvise once the planning is in place. It requires both flexibility and a focus on staying on brand. While "Real-Time" and "Content Marketing" seem like buzzword overload, it is simply an evolution of marketing triggered by modern day behaviors. In other words, not a fad—In my opinion.