« Brands Who Used The Force on Star Wars Day #Maythe4thbewithyou | Main | What Comes After Social? » 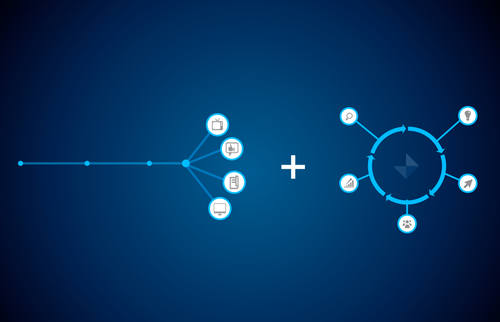 In the beginning, there were products and services, and some were good. Fewer became trusted brands, but those that did enjoyed unquestioned loyalty supported by a simple yet effective marketing engines built to reach people in mass quantity. The formula worked for decades. An empire was built on the shoulders of Madison Avenue and expanded globally. It is an empire, which still exists today, though arguably it’s a diminished version of its former self.

More recently, technology has had it’s own evolutionary process which it’s still going through. Well over a decade ago, when large organizations developed and updated their complex Web properties, the most popular and rigorous process one could follow in development was referred to as “Waterfall”.  Think of this as a descending, linear staircase where one step of the process was completed in full before moving on the next. The methodology was rigorous, but also left little room for tweaking, testing, adapting and improving along the way. 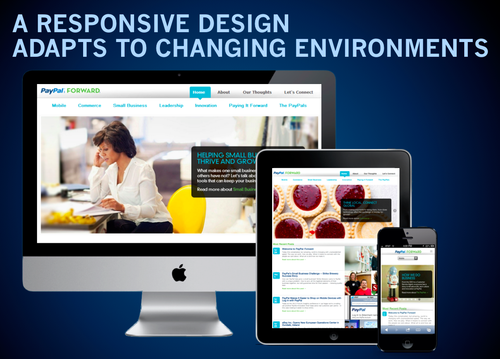 Responsive Design
Today, digital design and development is often done leveraging the “agile” method of development, which favors smaller, cyclical bursts of development and rapid testing. Start-ups favor this approach as well building not only their tech products but also their business models in a way, which resembles more of an agile philosophy vs. a rigid, sequential approach. Even “large” start-ups like Facebook demonstrate this in how they roll out enhancements to their global platform, often making the changes incrementally, rolling them out with select users and then adjusting based off the data they analyze. Google often works this was as well. If you were to undertake designing and building a digital property today—you would also have to ensure that it would perform across multiple platforms (desktop, tablet, mobile). A popular methodology for developing this way is called “responsive design”—a technique, which leverages code that results in a shape shifting design which auto-magically fits the medium it, is being interacted with in. 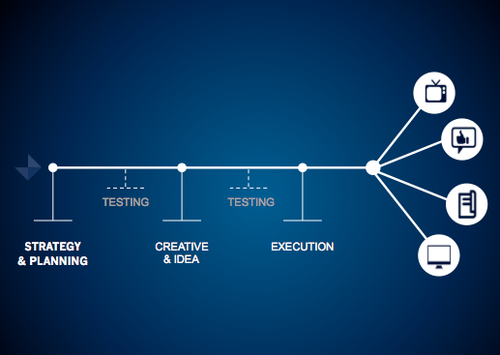 Most Marketing Remains Linear And Unresponsive
Despite the pervasive nature of all manifestations of digital, including social and mobile, much of the marketing emphasis remains dedicated to reaching people in mass, following a tried and true formula for advertising designed to build off consumer insights and craft compelling messages which could be distributed across a myriad of channels (including digital). The approach is designed for the broadcast industrial machine including print, radio and television, which, despite rumors of its demise is likely to stay with us for some time. The problem it poses however is that it is an approach that much like its counterpart in tech development, (Waterfall) is neither nimble nor flexible and isn’t built for rapid change nor does it adapt well beyond the dominant media it was designed for. 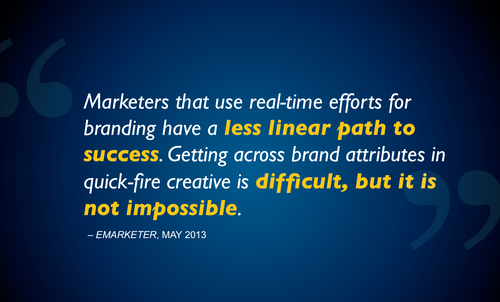 “Content Marketing” Is Disrupting Modern Day Brand Building
CMOs, chief digital officers and brand managers across many organizations are currently grappling with the notion of content used in the context of marketing—inherently they understand that their customers value content, consume it, create it, and share it—and they want in on the action. They also understand that this type of content isn’t often the traditional campaigns they execute for broadcast so they face a dilemma:

How do they find it?

How does content scale, reaching the right audience at the right time?

How do brands insert themselves into the content ecosystem in ways that bring value back to the brand? 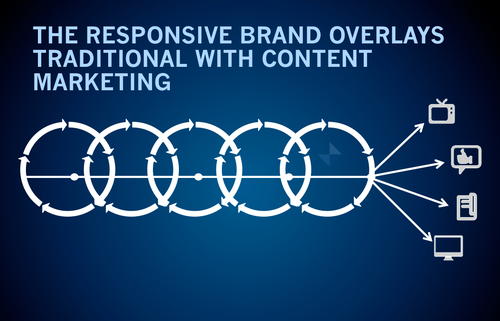 Responsive Marketing
The solution to the content question lies somewhere between acknowledging that a brand must support both a traditional, linear marketing model in addition to a newer, cyclical construct which is constantly in tune with the current environment and operates in consolidated time frames. Responsive marketing sits at the core of the content evolution that many companies find themselves trying to navigate as they pull together newsrooms, command centers and media operations which are designed to help brands act more like publishers. All of these can be effective in treating the symptoms a brand may exhibit if they possess only competencies in linear forms of marketing, but they do not address the root issue—deconstructing a marketing machine which places the majority of resources on mass marketing will ensure it never gains proficiency in alternate forms of content and media.

A more holistic approach is needed. 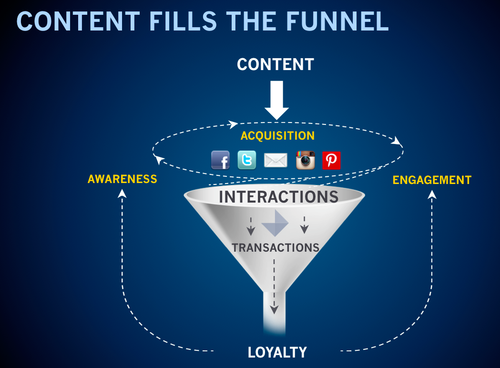 The Acquisition & Engagement Funnel
Marketing is by design measurable, and most marketers are trained to value metrics, which can be at minimum tied to awareness and ideally connected to sales and loyalty. This is where the relationship between responsive content marketing and business objectives must be reconciled—what good is content if it is not connected to commerce? Content should be a vehicle, which “fills the marketing funnel” and should be leveraged as the currency, which entices the target to share, thus creating further awareness for the brand, which can lead to bringing others into the funnel. It is the consumption of content via social, web and mobile which fuels the acquisition and engagement funnel—the flow works as follows:

Shared And Found Content Drives Acquisition
Content which is optimized and valuable inevitably finds its target, whether through paid, owned, earned or shared means (usually it’s a combination of all). When content is found valuable, it often leads to an “acquisition” whether it via e-mail or a subscription to a brand’s social property. The “consumer” in this construct demonstrates intent to at minimum engage with the brand.

Acquisition Drives Engagement
Once a consumer, customer or prospect is acquired, a brand can further engage via content, messages, and through “micro-interactions” over time. Each like, comment, or share on Facebook for example is a micro-interaction, which solidifies the relationship and loyalty between the brand and the consumer.

Loyalty Creates Awareness
Customers “acquired” via social and digital means are now available for targeted content marketing tactics which can be especially effective via paid enhancements whether that be through social or search. In the case of social—shared content leads to further awareness using the networks of peers as a distribution ecosystem while organically raising its profile in organic search results. Content As Currency: The Four Key Archetypes
For content to be successfully leveraged at the open end of the marketing funnel, brands must understand the full landscape of content types and the relationships they have with their core paid, earned and owned channels. The four archetypes are:

Curated:
A brand can curate content from infinite digital sources and provide value by deriving signal from noise. A popular tactic connected to curating is aggregating it in a single destination for easy access.

Co-created:
Content can be co-created amongst consumers via collaboration or through the consumer and the brand itself. Brands, which encourage consumers to co-create content with it, invite them to participate but cannot often control how consumers will want to co-create.

Consumer generated:
Consumer or user generated content is often produced by non-professionals and May or may not include references to the brand. It’s often in highest quantity but also lowest quality. 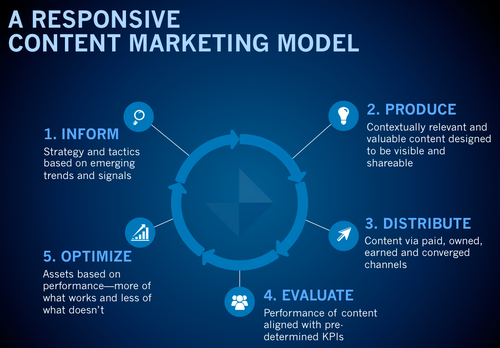 Building & Maintaining A Responsive Content Marketing Machine
In order to build a content machine for a brand or business, the leadership behind it must buy into the premise that content is a viable brand building tool. This sets the stage for an evolution of roles within the organization—brand managers must at minimum be literate in community management, editorial and digital analytics. Organizations internally should re-evaluate their digital centers of excellence and take stock of partners to ensure that content strategy and execution exists as part of the mix. This foundational work is core to then constructing a an “always ready” content machine, which operates in a continual, cyclical fashion as part marketing, part editorial operation as illustrated above. 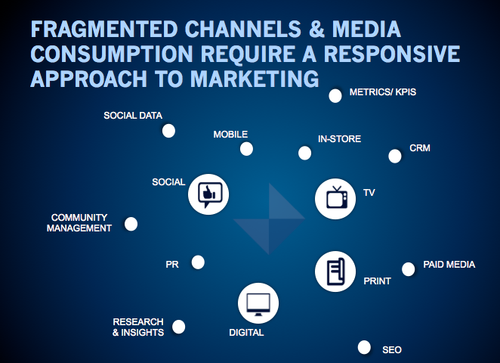 Conclusion: Marketers Must Evolve Beyond The Linear
Unlike software or web development, marketers have had less pressure to overhaul their approach despite signs that media consumption is highly fragmented, shifting to digital and increasingly more difficult to track. As more pressure is applied to the CMO to produce results for the organization; it is more than tempting to rely on the mass metrics of the past to demonstrate that reach is being achieved at scale. This undermines the need for marketing to undergo it’s own transformation where shifts in resources go into building up direct media channels (social or owned media) and potentially reaching more targeted audiences who may be inclined to share a brand’s content with their peer networks. An agile and adaptive mentality is badly needed in the marketing arm of organizations—one that is less dependent on historical data to make decisions and is inclined to parse data inputs as they come in daily.

The content conundrum represent the tip of the iceberg for the marketing discipline but must be dealt with as proof mounts that content is valued while overt advertising and marketing is something to be filtered out. Brands will learn to be more flexible, in tune with rapidly changing sentiment and responsive in their approach to messaging engagement and telling their stories across a de-centralized and splintered media landscape.