Native Advertising Isn't The Enemy—We Are

"We have met the enemy and he is us"
~Pogo

You should stop what you are doing and read this piece on Native Advertising by Andrew Sullivan, in which he asserts "journalism has surrendered" on the topic of native advertising. Specifically the form that seamlessly blends marketing with editorial in a publication. Aside from it being a wonderful and brutally honest assessment of native advertising and its influence on media, Andrew is both right and wrong in the piece when he says this:

"At one point, the reputation of that journalism is going to tarnished by the fact that you’re not sure if it’s done out of a commercial interest. I have to say I don’t think it’s sustainable. It will collapse when the readers figure it out. It should have been front-page news that Time magazine reporters were to begin reporting to the business side."

What Andrew gets right (maybe) is that the reputation of journalism is going to get tarnished. But we have to ask ourselves for who will it really matter? It will matter to the highly informed—the one percent of media consumers you could say. To the others, we must get a reality check and really digest what's happening in the world of media consumption for the average person. There are a few forces at play: 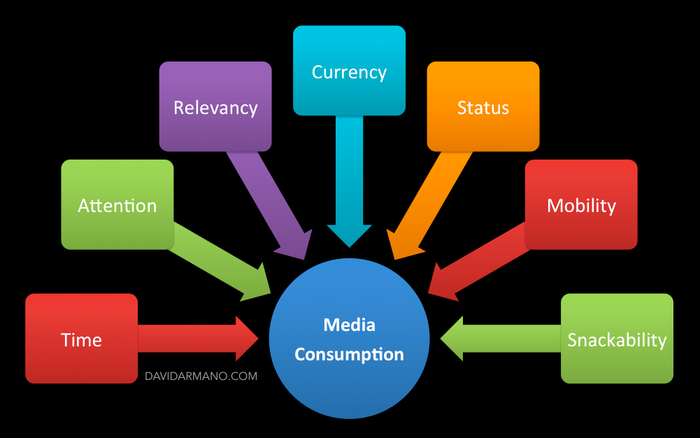 Time: There's a finite amount of time we have and it's increasingly being chipped away by technology and a surplus of media stimulus. We simply don't have enough of it.

Attention: Sorry, but most of us can now be clinically diagnosed with ADD. Maybe we weren't born with it—but again, technology has taken its toll. We have so much information coming at us, it's increasingly difficult to focus. Watching a two minute video on YouTube now seems like a massive commitment.

Relevancy: Blame social media. We are all so consumed in our own worlds that if media/news doesn't seem relevant to us—we ignore it.

Currency: I've said it a million times. Content is currency. Ignore this sociological reality at your own peril—people now use content as a way to build their reputations and credibility with peers.

Status: It's what comes after currency. Share the best content that your peers and friends value—see your social status rise.

Mobility: If your content can't be consumed or shared via mobile—don't even bother. Our context for media consumption is now "on the go".

Snackability: We've been trained to "snack" on media all day long. It's becoming harder to carve out time for media meals which can't be consumed quickly. Do you have teens? Watch their media consumption behaviors.

In short, we are the reason native advertising exists. We're the reason cat videos on YouTube are popular. We're the reason that in depth journalism is becoming an endangered species. On that note—I'll end here before I hit 500 words. Because you won't read more.