There are few documents, articles or any media for that matter that capture and illustrate the complex yet efficient nature of disruption than the New York Times 2014 Innovation Report. Recently leaked, presumably in some connection with the dismissal of executive editor Jill Abramson the 91 page report has been somewhat eclipsed by the debate around Abramson. But while that story has been garnering the most attention in the media—it is the innovation report which needs to be read cover to cover by anyone whose work includes a digital media component.

Scratch that—anyone who works should read it. And you have no excuse—I'll make it easy for you. You can download the PDF from here. Print it out or save it to your iPad/tablet but just READ IT. After spending a few hours with it myself over an evening, my conclusion was that the document, while not earth shattering in the recognition of disruption nor the recommendations to combat it—it paints an eerily detailed portrait of an entrenched organization struggling with itself to adapt, change and succeed in a world that no longer recognizes the New York Times as king of the hill. If you read between the lines as you digest the information, it is astonishingly insightful.

I don't think I can do the entire document justice, but I'm going to try to capture a few reoccurring themes that stood out for me. I'll also include quotes from the report—but again, please do yourself a favor and make the time to read it yourself. 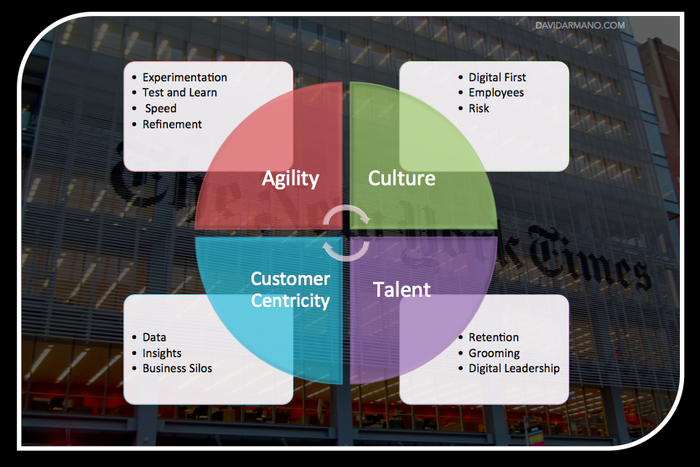 Agility
Page 32: "Launch efforts quickly, then iterate. We often hold back stories for publication, as we should, because they're "not quite there yet"...we can adopt a more basic form so that we start getting feedback from users and improve it over time"

Agility in some form or another is a constant theme in the report surfacing as a response to the reason it was being championed; disruption. In fact the entire report is essentially a response to the disruption from competitors who move quickly and seem to have an intuitive understanding of customer media behaviors from mobile to social and beyond. The notion of agility highlights initiatives such as Snow Fall but also promotes a systematic approach to both experimentation and innovation highlighting setting goals and tracking progress.

Culture
Page 38: "At The Times, we generally like to let our wok speak for itself. We're not ones to brag. Our competitors have no such qualms, and many are doing a better job of getting their journalism in front of new readers through aggressive story promotion".

I could not help but feel the tension in culture in nearly every page of the report. Old vs. new, editorial standards vs. attention grabbing techniques, silos vs. open collaboration—you could almost feel the palpable struggle of an established organization grappling with itself. One of the areas where you could feel culture at play was in the section where the report discusses "connection" and puts forth the idea that journalists like Nick Kristof, David Carr and Charles Duhigg—all journalists who promote their own work are doing it right and these skills can be taught. it remains to be seen if the organization can stomach a small army of staff who have built personal brands at scale and leverage them for mutual benefit. Ultimately the document evangelizes a "digital first" movement to be embraced in all corners of the organization, de-emphasizing the front page, print and other hold outs from a previous era. Some would question if it's too late—but that's where the report is rooted.

Customer Centricity
Page 60: "The many business-side development and roles which we refer to as "Reader Experience" throughout this report —need to work more closely with the newsroom instead of being kept at arm's length."

I debated on elevating this, but I think it's a macro theme in the report and it's not unusual for any organization, especially a large one that has enjoyed dominance in market for a time to lose sight of how their customers think, act and behave as it relates to the world you have in common. There are numerous areas in the report that reference how the NYT's competition have seemingly mastered timeliness, relevance or features which media consumers can't get enough of. The report also goes into some detail about the silos the organization needs to work through as an impediment to serving the modern needs of customers. it seems elementary, but there's enough evidence to support a concerted effort to make "Reader Experience" a top priority.

Talent
Page 88: "I looked around the organization and saw the plum jobs—even the ones with explicitly digital mandates—going to people with little experience in digital. Meanwhile, journalists with excellent digital credentials were stuck moving stories around on section fronts"

There were numerous references to the type of talent The Times had at their disposal from analysts to design to technology, product, R&D and more but it wasn't toward the end that you got the sense that there was a struggle to ensure that the right talent was retained. Digital talent by definition can be fickle, impatient and drawn to emerging trends (as digital media typically is always evolving)—but you got a sense from the report that there was a concern for today's departures becoming tomorrow's competitors.

Summary: Disruption Happens
The NYT Innovation Report provides a glimpse into an industry under tremendous pressure and illustrates what it looks and feels like for a large, established organization with a rich heritage to come to terms with a world that looks very different than it did when tried and true formulas worked. It should be required reading for any executive or professional whose job it is to make sure their business is resilient enough to thrive in spite of change. In short, being an entrenched organization or a business resistant to change is no longer a viable strategy.

Posted on Sunday, May 18, 2014 in Business, Innovation, Technology | Permalink