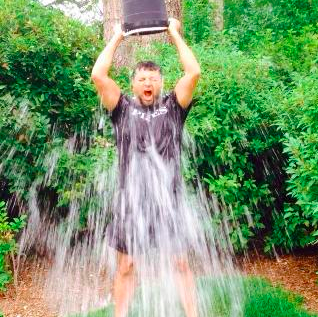 Like millions of others, I recently filled a bucket full of ice and water, shot a video and called on a few friends to do the same. While not required to, I also donated to the ALS association because it seemed like the right thing to do.  Is the infamous "Ice Bucket Challenge" working? According to the New York Times, the campaign has raised over 13 million dollars compared to the 1.7 million raised last year at this time. So is there a down side? According to my social feeds—kind of. While I don't agree with them, here's a snapshot of some of the feedback I've seen in addition to the participation. Perhaps you've seen some too:

The Narcissist Police
This person is quick to point out that anyone taking the challenge on is simply enjoying the attention and in it for themselves vs. the cause. They feel obligated to point this out, before they move on to posting another selfie of themselves.

The Hard Newser
Isn't there enough real news going on the world we should be paying attention to? This person overlooks the fact that part of the success behind the Ice Bucket challenge is probably linked to the fatigue associated with watching the world's problems escalate. Who doesn't want a break from non stop reports of global violence and unrest?

The Financial Advisor
This financial weekend warrior is quick to point out that all of those people pouring ice cold water on their heads are missing out on the financial part of the equation and should part ways with money that the "advisor" has no viable claim to. The advisor conveniently overlooks the fact that many who take on the challenge go on to donate themselves or inspire others to take action but instead places their financial advisor role first.

The Meme Hipster
Ice Bucket Challenge? That's so last week. This person can't stand the idea of jumping on a bandwagon and instead is focused on getting on the next trend before it takes off. Godspeed meme hipster—keep your finely tuned ear to the ground.

The Marketer
This person won't actually take the challenge or support the cause, but instead prefers to debate the pros and cons of the campaign, dissecting the approach and debating with other peers if it's a case study or one hit wonder.

The Ice Bucket Challenge has taken the world by storm and leveraged social media as an engine which keeps it running across all media. But above that—it's an opportunity to take a break from putting yourself first. Personally—I'll take the opportunity.