« 5 Ice Bucket Envy Filled People To Avoid | Main | Brandshare: Is The Value Exchange Between Brands and Consumers a Myth? » 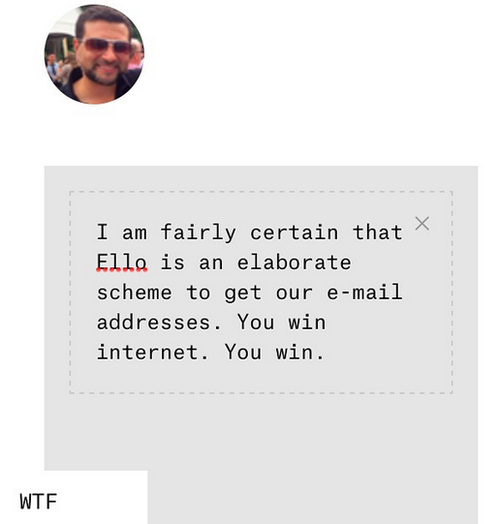 I could be wrong.

In the early days of social media, when Facebook was still for college kids—Twitter seemed like an utterly useless fad to most people. But I was really intrigued by it and stuck with it and connected with others, ultimately building an audience and a real time stream I could dip in and out of whenever I wanted to.

That was 2007. Fast forward to 2014 and it's not Twitter my network is talking about—it's "Ello", a social network built on the promise that it won't touch your data nor will it ever give in to advertising. Its manifesto is posted in plain sight on the network.

"Your social network is owned by advertisers.

Every post you share, every friend you make, and every link you follow is tracked, recorded, and converted into data. Advertisers buy your data so they can show you more ads. You are the product that’s bought and sold.

We believe a social network can be a tool for empowerment. Not a tool to deceive, coerce, and manipulate — but a place to connect, create, and celebrate life.

You are not a product."

Having spent a portion of my morning on the network—I am not convinced. Where Ello seems to be missing the point is that they may not have included enough value as part of their "value exchange" for participants to stay committed to it. Privacy is not enough—for a network to break through today you've got to make it cool, useful, usable and desirable (and "ello"—mobile).

I'm not sure Ello is delivering any at this point. It doesn't come off as particularly elegant—I found it hard to even figure out how to post and there wasn't enough value for me to overcome this. I get better content by exploring current networks vs. what I've seen so far on Ello.

So what does Ello have?

It's got FOMO in spades (Fear Of Missing Out). For a short time and for reasons only they know—it's got enough of the right people talking about it and asking for invitations (like I did).

So what doesn't Ello have yet?

It's got media coverage building some hype—but I've already seen negative word of mouth, (WOM) even when I asked for an invite. Perhaps you can count this post as negative word of mouth as well though I will suspend complete judgement...however, at this time—I'm not seeing the value or it just might not be for me.

But it did get me thinking about what causes people to take action. FOMO is powerful—I was able to secure an invite, create a profile and kick some tires. WOM is pretty powerful too—I have yet to see peers telling me they love it. Right now there's a collective "WTF?" as many try to make sense of it.

I also learned a lesson from my early days on Twitter—sometimes something great is not immediately recognizable in the world of social media. But sometimes you just have to go with your gut as well, and my gut says that value exchange trumps privacy and commercialism. Right now Ello is light on providing enough value to make it a serious ad free alternative to anything.