« Ruling The "Aggregators" With Creative and Editorial Talent | Main | It's Not The Size of SXSW, It's How You Use It »

MeerKat Is The Next Big Thing. But For How Long? 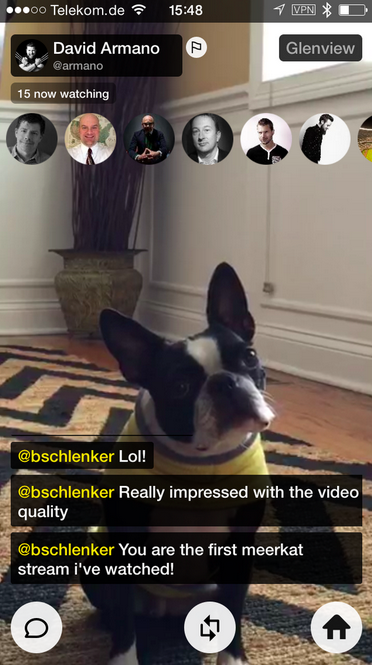 Live video streaming is nothing new. Many have tried it—and it's always sort of taken off, but never really went "mainstream". MeerKat might just change all of that. But how will we know? For starters, it's got a really good shot at stealing the show at SXSW next week—a venue that's been known to uncover the next big shiny object in social. It was after all, SXSW that put Twitter on the map, then subsequently Foursquare and more recently though with less impact, Vine.

But what exactly is MeerKat?

Part Snapchat, part Twitter, and part video streaming app—MeerKat lets you effortlessly stream video from your mobile phone using your Twitter connections as a starting point. It's incredibly easy to get up and running—once you download the app, you are streaming within seconds. You can stream on demand or you can schedule a stream in advance. You can subscribe to other streams, like them or comment as they stream—the comments show up as tweets which creates an odd but interesting synergy with Twitter. When you are done with a live stream, you can save it as a video on your phone which then gives you the opportunity to edit and post at a later time.

The problem with live video streaming has always been that people's lives are not always that interesting—so you have to question who would tune into a live stream of you teaching a dog a new trick? But, that could be said for all of social media—it's everyday people doing everyday things.

Unless you're a YouTube, Vine, Instagram Celebrity or perhaps in the near future—a "MeerKat star". And this is what could very well happen to MeerKat. On Vine a whole new breed of performers built new audiences who mastered the six second medium. Then they took that over to Snapchat and build audiences there. MeerKat could follow the same pattern and it's turning into big business as Twitter recently acquired Niche, a platform that specializes in connecting brands with influencers in emerging channels (everything but YouTube).

Which brings us to Twitter. Why hasn't Twitter launched their own version of live streaming, native to the Twitter platform or as a sister app such as Vine? That could be coming next. Or they could offer to gobble up MeerKat. In the meantime as thousands of tech influencers descend upon SXSW next week—you can expect to see a barrage of MeerKat live video streams in your social feeds. First the tech influencers, then come the brands, and then comes the talent who build large audiences on the platform. This is the pattern you might just see unfold in the next few months.

Brands—get your teams experimenting with MeerKat now, and keep an eye out for the influencers you want to start working with. Even if Twitter comes up with their own solution—you'll be better prepared.