If you’ve come here looking for the latest thinking on virtual reality, drones and autonomous driving—you’ve come to the wrong place. Marketers are an interesting bunch—we pride ourselves on “being in the know”, with some good reason… Part of our jobs are to stay one step ahead of the game so we are better prepared for the changes that inevitably effect the business of our industry. But in the pursuit of staying ahead of future trends—we often overlook massive shifts that need to be operationalized over the next five years, if not decade. In the pursuit of keeping our eye on the ball—I’ve identified six near term trends influencing the business of marketing: 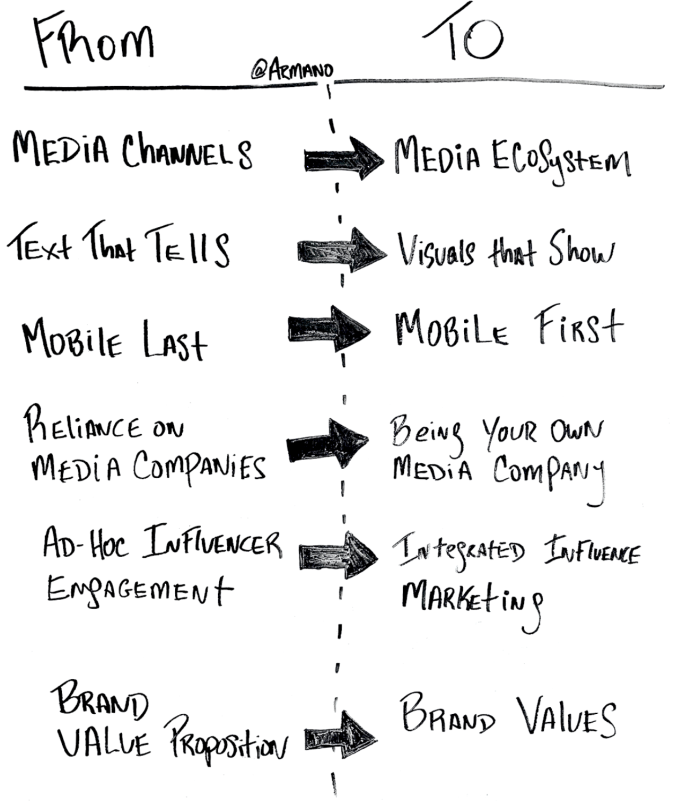 From Media Channels To Media Ecosystem
Blame Digital. Just when we were getting used to shifting efforts and dollars to reflect not only print, television, radio and the internet—the internet itself has fragmented into a million tiny little pieces which blur the lines between paid, owned, earned and even social when it comes to dollar spend—and that’s not even getting into how it all get’s measured. Case in point—in the past year, MTV has seen it’s traditional television viewership of the Video Music Awards decline 34%. However if you look closely at the numbers, digital views including Facebook Live Streaming increased 70%. The problem here? MTV has yet to monetize the ever fragmented and complex digital media ecosystem and still relies on traditional TV advertisers to make money.

Election 2016: When “Data” In Isolation Steers Us Wrong Instincts vs. Insights
Like many of you, I was wrong about who I thought would win the US election. But it wasn’t always that way — I had changed my opinion based on the “data” I was seeing and that’s where many of us are scratching our heads. My first gut instinct was formed around the time of both party conventions. Having followed both, sensing the momentum and enthusiasm of the unconventional GOP convention, I remember thinking to myself, Trump really has a chance — he’s going to tap millions of people displaced by a global economy. He’s speaking directly to the working class disenfranchised — people holding down multiple jobs in some cases and feeling like they can never get ahead. He’s giving a voice to those who feel like they have been ignored or are underrepresented. And above it all, I was picking up something in the air that felt like a change agent was wanted, even if that agent was more rough around the edges than many would have preferred…

I grew up in working class Long Island. I intuitively grasped how he could win and I was hesitant to rush to judgement over how or why millions of Americans were supporting him. Over the course of weeks and months, being the news addict that I am, I began to change my outlook on Trump’s chances.

Why? Because the polling data and news media sentiment.

The Limitations of Polling & Media Influence
Day after day, I would pour over polls and read headlines that would point to trends making the case that while both candidates were unpopular, Hillary seemed to always come out on top. The media painted a picture of a Trump campaign in disarray and the tone of the majority of the coverage I could see from multiple media outlets was largely negative. Polls while far from perfect are data points. Media sentiment is also a set of data points. When you pour over this information, it begins to inform your opinions. And that’s what happened to me. My informed view shifted from Trump has a chance to Hillary is a definite win.

And I think there’s an important lesson in all of this. Was the data bad? I don’t think it’s that simple. Like some analysts have stated, it’s likely that the polling data was incomplete. Which means this data cannot be fully trusted. If a significant portion of voters didn’t feel comfortable polling but instead voiced their opinions with their votes, then the data is meaningless.

Sampling is an art that becomes harder and harder to deliver well against. All research methodologies for polling have inherent biases and it becomes clear that relying on a sample of people willing to speak to an interviewer or take a survey online is becoming more difficult to pull off accurately. Political polling is disrupted and old models don’t work. But they are still very valuable if cross analyzed through other intelligence methodologies that focus on “harder data”.

Reading Between The Lines
You have to read between the lines. This is something that ethnographers often do. They immerse themselves in the lives of the people they seek to derive insights from. They go deep in place of skimming vast quantities of data points both quantitative and qualitative. They go heavy on empathy but also possess the right amount of analytical rigor to translate observations into insights.

And what about the media sentiment? Did I misread it? No, I read it accurately but like many others, I underestimated the impact that media sentiment would have on potential Trump supporters. In retrospect the negative media sentiment for Trump likely mobilized his base and even some who were on the fence. Edelman (my employer) has been producing data for years which shows that trust in media is on the decline and urging us to pay close attention to social signals when forming opinions and strategies.

Search & Social Signals Provide Additional Clues
And let’s not forget about search. As far as data goes — Google may have presented a more accurate representation of how voters were inclined to act. Trump related searches showed dominance over Hillary inquiries in the final days of the election and higher volume in states such as Pennsylvania where polls projected Clinton to win. The search volume from Google presented signals that were largely missed by both pundits and the media — yet they aligned with voter behavior. 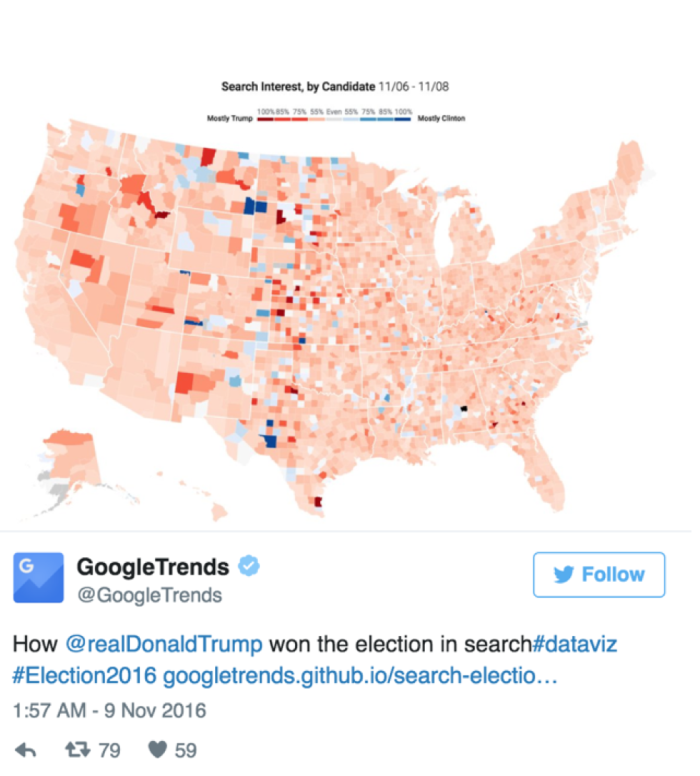 Insights, Instinct AND Data — But Never In Isolation

This political season more than ever demonstrated the shortcomings of looking at data and information sources in isolation, such as polling. A lesson that I’ll take away is to not only have more faith in my instincts but also to be a better student of the impact the media has on public sentiment and how that sentiment is reflected online in the forms of social and search data. For those of us who work in marketing and communications, we’re going to need a better appreciation for the balance between instinct and insights, gut and analysis, and how deep we need to go to accurately interpret signals and multiple data points so we can better inform our thoughts and actions.