It took a health glitch and the ups and downs of post-divorce living to make me fully realize that life is the sum of our relationships. This pet project started spontaneously while attending SXSW for my twelfth consecutive year. I decided to give it a more permanent home here, for now... 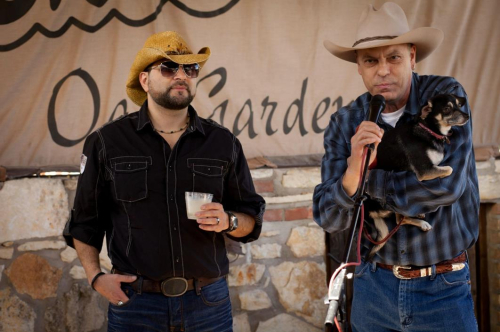 Selfie Story #13: The Talented Mr. Binhammer
I'm making my first exception of going back in time for a photo of my friend Richard Binhammer because we haven't seen each other in person in a few years. That said, Richard and I talk almost weekly and I count him in my inner circle of people I will share the good, bad and ugly of life and vice versa. Richard and I first met when he was helping Dell navigate the social media waters as a result of a crisis caused by a prominent blogger. We struck up an instant friendship almost immediately and he even invited me to tour Dell, meeting several executives there and discussing the value of being on social media (this was during a time where many companies questioned the value).

Richard is also one of the most talented people I know. He's fully embraced his creative side by leaning into photography and his photos are truly remarkable. He's taken many road trips across the U.S. and has captured some of the lesser traveled paths in simply beautiful and sometimes haunting photographs. Richard's photography can be viewed here. Lastly, Richard has been my partner in crime as co-host of "Allhat"—one of SXSW's most talked about events. We've been playing with the idea of bringing it back, so stay tuned. I'm grateful to call Richard a true friend. 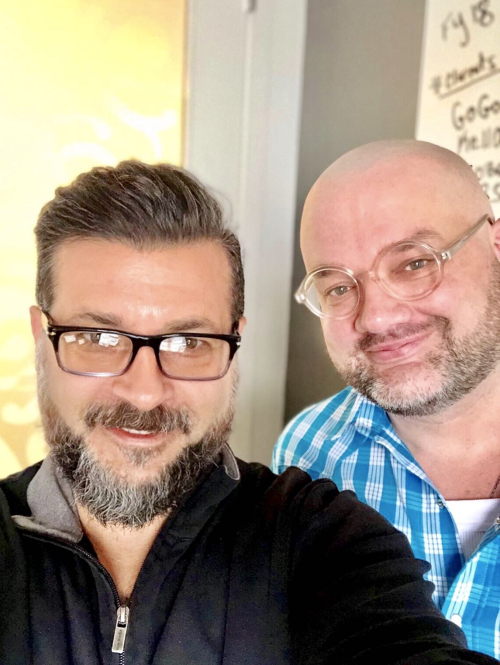 Selfie Story #14: The Artisanal Strategy of Josh Baze
I'm fortunate to have the privilege of working with smart and talented people daily and Josh is no exception. Josh joined Edelman from Google several years ago and our work has been better since the day he arrived. As a strategic planner, he's the kind of person that blends cerebral intelligence with intuition and every time we've worked together, I've been so impressed with his ability to uncover that key insight and express it eloquently. I've shared with Josh that he approaches strategy as a craft—which in reality it is, and he's highly skilled in it.

Artisanal strategy aside, Josh is a terrific human being. Every time we chat, whether it's a short drive by his desk or in the hallway, or on social media or in a more formal one on one—we cover so much interesting ground, both professionally, personally and philosophically. And Josh loves dogs—because what's not to love? I feel fortunate every time I get to work with Josh as his time is so valued and always look forward to the working as well as the talking. Selfie Story #15: The Beautiful Mind of Neil Clemmons
My relationship with Neil Clemmons also goes back well over a decade—probably over fifteen years. Neil first interviewed back when the digital agency Critical Mass had a small satellite office in Chicago and we stayed on each other's radar which was a no brainer for me as Neil was the smartest people I've ever interacted with. When I wanted a change of pace after a couple of fast and furious years at Digitas, Neil hired me without hesitation. Neil's nickname at Critical Mass was "Google", which is kind of fitting because he just KNOWS so much. He's a walking source of instant inspiration and mental calculation.

He's way more than that though, he's also an incredibly talented woodworker and he's been a mentor over the years, not only to myself but many others who benefit from his wisdom and beautiful mind.  He's an amazing business strategist—I've sought out Neil's counsel numerous times on all things business given his wealth of experience. Before Neil came to the agency world—he worked in technology for companies like Apple. To this day, Neil and I have a tradition of meeting up at a local watering hole called "Meirs Tavern"—a quintessential old school Chicagoland establishment. We sit at the same table, order the same thing (cheeseburger and fries) and catch up on life, work and adorable pictures of his grandchild. Neil's mentorship toward me (and others) inspired me to become a mentor and give freely of my time. He's a force of nature, a quality human being and still one of the smartest people I know. 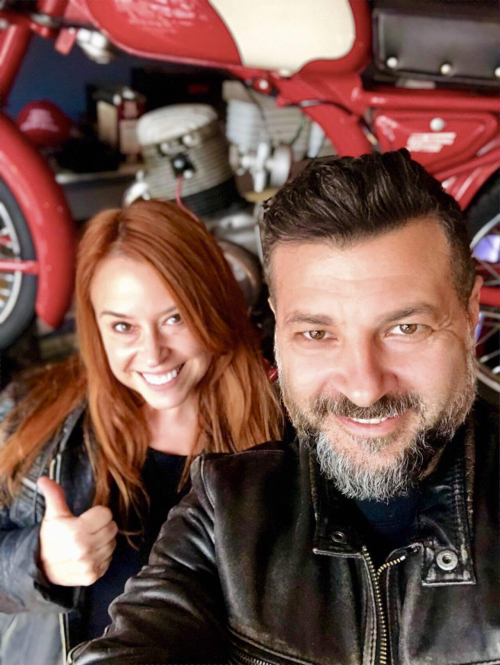 Selfie Story #16: Libby Pigg, Rennaissance Woman
There are few people I would give the honor of describing as a Rennaisance man or woman but Libby is definitely one of them. We first officially met at Edelman though I think I crossed paths with her at a WOMMA event. She introduced herself by walking into my office saying, "hi—I'm Libby Pigg, I'm kind of a big deal on My Space". This was self-deprecating humor because My Space was already beginning to fade away, but it is true Libby was a big deal there back in the day. In addition to being a veteran in the agency space, having spent most of her time at Edelman—Libby has performed in Goth bands, singing and playing an electric viola, she's done voice-over professionally and she's a great networker to boot.

I've always appreciated that Libby is true to herself and marches to her own beat (or viola)—what you see is what you get with her and in my book that's a great quality. Libby and I took this picture recently and we reminisced how far we went back and some of the crazy things we did together (she was an accomplice when I stole a Pete Cashmore cardboard cutout from a competitor event—sorry Weber!) Libby was also responsible for one of my more memorable experiences with Edelman—as account lead for Ben & Jerry's she invited me to participate in a few days of service for St. Jude Children's Hospital, and I even got to meet Ben & Jerry. Life is more interesting (and fun) with Libby in it, and I'm grateful to have her as a friend. 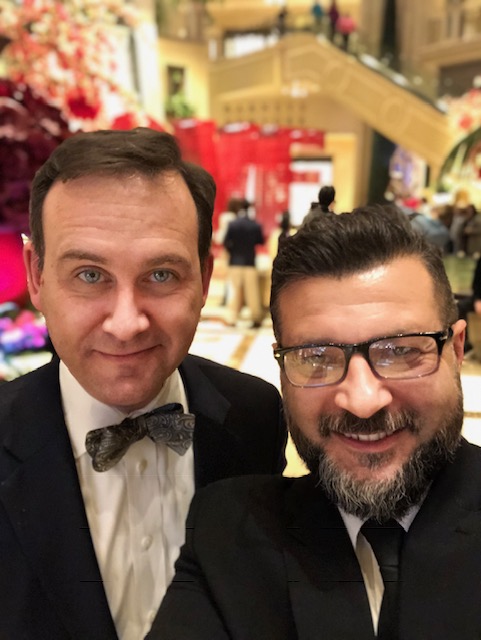 Selfie Story #17: Scott Monty, Neoclassical Marketer
Today is Scott's birthday, so it only seems fitting for his Selfie Story. Scott Monty and I first met during the early days of Twitter, around 2007 and IRL at something we used to call "Tweet Ups". This was before his days of Ford fame as one of the corporate pioneers of social media (Google Fiesta Movement). For context, this was during a time that most companies didn't have teams or people in charge of social or with that as part of their job description—Scott was one of the first. Most people know Scott for his trademark bowtie, his superb ability to curate the best of digital trends and insightful commentary on the future of digital with a unique nod back to the past.

In addition to being one of the social media's first voices and executive personalities—Scott is a warm, funny and decent human being who values the community side of digital, not just the business. Scott and I have always made time for each other either at conferences, on the phone, or via DM. He's mastered many forms of digital content from blogging to newsletters to podcasts but I'll always appreciate his sense of humor, humility, class and his appreciation of connection. 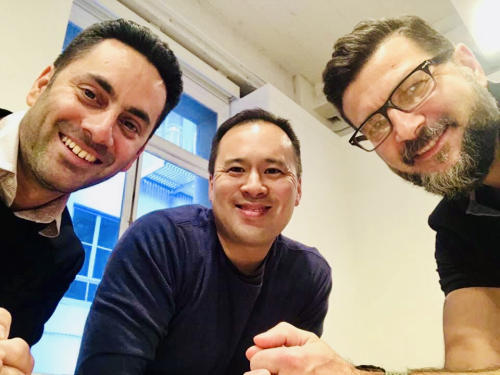 Selfie Story #18: Jeremiah Owyang and Shiv Singh
I am breaking a rule on this one as Jeremiah and Shiv both deserve their own Selfie Story, but rules are meant to be broken, and I wasn't able to ger recent selfie shots with both Jeremiah and Shiv separately so consider this a "two-for-one" :-)

The Immersive Analysis of Jeremiah Owyang
Not unlike many of my "Digital OG" relationships, Jeremiah and I first met online through reading each other's writings, then interacting on Twitter and ultimately meeting in person, rinse and repeat for well over a decade. The thing I really appreciate about Jeremiah is that he's an analyst who doesn't simply study his subject matter—he lives it. He's done this first with the Web, then with social media, and subsequently the gig economy and most recently the wellness revolution.

Jeremiah is equal parts smart and compelling and one of his superpowers is to be an uber connector in the communities he engages with. He's one of the few people who really do a great job staying engaged with his network and helping others connect to each other. Jeremiah and I have also shared a lot of personal stuff every time we get some 1:1 time—he's a good listener and a great advisor. I consider myself fortunate to have Jeremiah close in my personal orbit as a friend.

Digital Executive, Shiv Singh
Like Jeremiah, Shiv and I were brought together during the early days of social media. Back then, Shiv was a peer working at digital agency Razorfish. What always impressed me about Shiv was just how grounded and intelligent the man is—rare qualities to co-exist together. One of the highlights of my career was being featured in Shiv's first book on social media—his writing is exceptionally thoughtful and insightful.

And Shiv is one of those people who you just root for as he succeeds. Since his time at Razorfish, Shiv has parlayed his success to companies like Pepsico and Visa as a senior executive and not surprisingly, he recently re-directed his career to co-author his latest book titled "Savvy" which tackles issues of trust and what's real vs. fake in media and society. Lastly, I have greatly appreciated the handful of times that Shiv has made himself available when I was looking for some career advice. He's one of the most capable people you can get counsel from—and having access to that and more importantly, his friendship is priceless.